Richard MasonerMay 8, 20106 Comments on The Lost Cyclist by David Herlihy

Bicycle historian David Herlihy follows up on his Bicycle History book with The Lost Cyclist, the true story of adventurer Frank Lenz. Lenz disappeared while attempting to travel around the world on a bicycle. 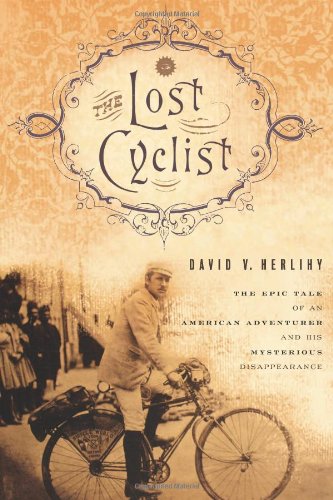 In the late 1880s, Lenz was a locally known high wheel racer when the ‘safety’ began to gain popularity. Lenz dreamed of circling the globe on bicycle. To distinguish himself from the previous bicycle circumnavigations, Lenz pledged to do this trip alone on the brand new pneumatic tire, while avoiding rail and boat travel as much as possible.

I found myself identifying with the late 19th century bike boom which has so many parallels with modern day cycling. The American cyclists were enamored with gadgets. They fixed cameras to their bikes to chronicle their bike journeys. They debated frame material, and bike styles, and suitable accessories. Cyclists often found themselves to be either admired for their achievements, or scorned as outsiders. Herlihy does a good job bringing Victorian era bike culture to life.

Amazingly, when Lenz traveled west across the United States, he suffered only four flats on the new fangled pneumatic tire. He passed through the bicycle friendly cities of Chicago, Portland, and San Francisco. From California he caught a steamer to Hawaii, onward to Japan and finally to China.

Lenz’s trip was sponsored by Outing magazine, and in his letters he expresses appreciation for the several cultures he encounters. It’s fascinating to me to see the widespread European and British influence back in this age of European empire. Lenz might be bicycling (or, more likely, carrying his bicycle) through the most remote jungles of Burma, and he can spend the night at a telegraph station manned by a British expatriate. Through China, his hosts were often American or British Christian missionaries or German military advisors. All of them marveled at his safety bicycle, and Lenz entertained chieftains, shahs, princes and local warlords by performing bicycle tricks.

As Lenz traveled across Persia, he was warned repeatedly to bypass the eastern portion of Asia Minor. The Ottoman Empire was in decline after the end of the Russo-Turkish war in 1878, and spreading factional violence between the Kurds and Armenians made travel across Eastern Anatolia hazardous. Earlier in his journey, Lenz was similarly warned of dangers from brigands in China. He survived China, so he apparently figured he could handle adventure in the Armenian highland as well.

Sadly, Lenz disappeared after crossing the Turkish frontier from Persia, and we enter Part 2 of The Lost Cyclist. After months with no word, it’s believed Lenz was caught up in the violence of the war torn region. Another well known adventuring cyclist, William Sachtleben, is eventually commissioned to travel to Turkey to find the lost cyclist.

It’s here that Herlihy’s narrative bogs down. The author chronicles Sachtleben’s interminable wait in Constantinople with the same detail that he described Lenz’s encounters with laughing school children in Japan. Because of unwanted European attention on the plight of Armenian Christians, the Turkish government forbade travel by Westerners into the interior in their attempt to cover up their repression. Sachtelben waits, he grows frustrated, and he waits some more.

Americans threw their weight around in the far corners of the world even in 1895 (Sachtleben demands the U.S. send a warship to Constantinople to force the Sultan’s hand in the “Lenz Affair”!), and through hook, crook and bluster Sachtleben eventually gains access to the region where Lenz disappeared. Satchtleben’s investigation occurs in the backdrop of the Hamidian Massacres, in which hundreds of thousands of Armenians were displaced and slaughtered by Kurdish irregulars with the tacit approval of the central government.

David Herlihy tells the story of Frank Lenz’s epic journey with a wealth of historical details and background. The book is not yet available (as of this writing) but it can be pre-ordered and should be out by June 2010.

Reviews of The Lost Cyclist elsewhere: