David Mobley apparently created this one hour self-defense video for the community access cable TV channel in Missoula, Montana. He purports to demonstrate self defense techniques you can use while riding your bicycle. Now he sells his “Bicycle Combat Tactics” video on Amazon.com. 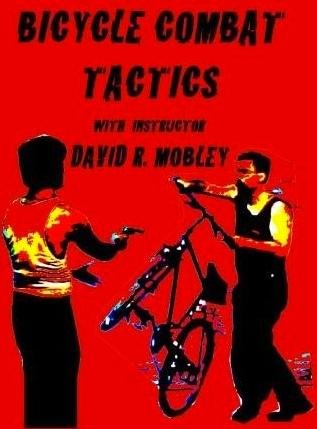 The instructional video looks kind of awesome in a campy, amateur way, but it doesn’t look especially helpful — there’s minimal instruction and you’re expected to already know a martial art technique. If know how to defend yourself with your bare fists, I’m not sure how much watching video of Mobley and his partner play-acting hypothetical attacks against a cyclist can help.

Are self defense techniques realistic for cyclists? The very occasional incidents I hear about involve somebody swinging a pipe or a bat at a trail cyclist to knock him or her off of the bike; I’m not sure how much your Rex Kwan Do can help if you don’t see it coming.

Tactical Driving: A personal aside

When he was teaching me to drive as a teen in the early 80s, my dad also developed a class on anti-terrorism driving techniques that he eventually taught to various police agencies and private security firms. I was his first student and guinea pig. One week my dad told me to practice parallel parking. The next week he had me practice a bootlegger (180 degree) turn. After that a standard U-turn, and then he’d evaluate my J turn (180 turn while driving in reverse) while ducking down to avoid machine gun fire. No lie. Well, not actual machine gun fire, but he yelled “BAD GUYS ARE SHOOTING! REVERSE AND TURN NOW!”

I ride almost everyday and night through what some people consider a bad neighborhood. Police installed video cameras on a bike bridge after a teen was attacked on it one night, and I work with some women cyclists who’ve expressed concern about riding through that neighborhood. I’ve had cop friends tell me to ride with a gun (yes, really). In five years of riding across that area, however, I’ve never been threatened with assault.

My dad worked in the field of corporate risk management for Asian conglomerates who were expanding their operations to high risk nations like South Africa. His job was to prevent kidnappings, assaults and murders of company employees and officers. Before that, he was a detective. He saw danger everywhere, and his practice of situational awareness rubbed off on me.

In my younger days, I also spent some time with Christian ministries for homeless and other underprivileged people, which means time in neighborhoods where the sound of gunfire is not uncommon. When somebody approaches and asks for a light or for the time, he’s probing your vulnerabilities. If you see a group scope you out and cross the street to deliberately intercept your path, it’s already past time to wake up and pay attention. These predators are looking for easy targets, and if you’re aware of your surroundings you’re possibly aware enough to hit back a little if you’re attacked. I’m a skinny cyclist who’s not especially street savvy, but I don’t act afraid nor do I call undue attention to myself.

I know people with hero fantasies, but I’m not one of them — my father has been in shooting situations and I have a brother who was robbed and then pistol whipped. I don’t walk or bike around in fear and paranoia that the scary strange man is out to get me, but I do try to be aware of what’s going on around me.