Cyclelicious had the opportunity to do a Q&A with Phil and learn more about cycling in his everyday life.

Cyclelicious: You are one of the principal sponsors, along with Novartis Pharmaceuticals Corporation, of the NOW and Novartis for MS cycling team. Can you tell us more about the team and how it came to be?
Phil: Novartis Pharmaceuticals shares my passion for creating MS Awareness and is committed to helping people with MS manage their disease through various treatment options and support services. My wife and I sponsored a young amateur cycling team for the past 5 years called NOW-MS. We are also committed to helping those affected by MS by raising funds and awareness. Louise and I decided we should take our love of cycling and mananging a cycling team to a new level by starting a professional women’s team. It made sense to join forces with Novartis and create NOW and Novartis for MS. Not only do we compete in races all over the country, but we team our pro riders up on tandem bikes with people who have MS, and participate in Bike MS rides nationwide.
Cyclelicious: On your Ride Across America to raise funds for the National MS Society, you biked around 100 miles a day for over a month, speaking about MS and fundraising along the way. Was this one of the biggest undertakings you have done? What drew you to raise funds for this charity in particular?
Phil: It was hands down the biggest mental and physical challenge of my life. Everyday I drew inspiration from people who have MS. They battle with fatigue every day. I knew I had to keep going for them. I have movement. Many of them don’t. How could I not keep going? I was drawn to MS by chance. The amateur team we chose to sponsor was already a big supporter of MS. I did not know a lot about this disease at first. But once Louise and I got involved and started to learn more about MS and meet the amazing people who are affected by MS and the incredible MS Society, it soon became my life work.
Cyclelicious: What were some of the more inspiring moments and times of the ride? Was the ride made that much better because your father and one of your friends accompanied you on it?
Phil: I am always inspired by people and what they have to say. Everyone has a story to tell and when you have hours to kill on a bike and riders join you along the route, you end up meeting the most fascinating human beings. If you have a few days I can tell you some great stories. Having my dad and friends along to support me was magical. I grew up in Antigua and I didn’t play a lot of organized sport, so there was never an opportunity for my dad to watch me. Then I went to boarding school in New Zealand when I was 13. So to have this time with my dad, day after day after day, you can’t beat that. We were
making up for lost time. 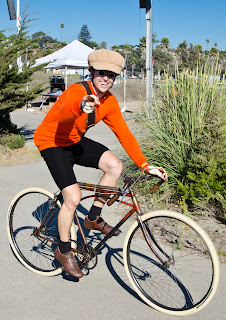 Phil Keoghan after completing 100 miles on a bicycle made 101 years ago.
Cyclelicious: The recent MS rides you have done in the Los Angeles area have both been on the saddle of a 1910 Labor Bicycle. Most recently, you biked 100 miles on it. Can you explain where you learned of this bicycle and how your came to own it? Have you thought of riding parts of the 1910 Tour de France on it?
Phil: I found the 1910 Le Labor bike in France when we were there shooting a season of The Amazing Race. I was introduced to an antique bike dealer because we were doing a Tour de France challenge. I saw this amazing bike and thought “I have to have this”. Riding it on the Bike MS ride last year and most recently on this years ride was a great challenge. I had one gear and the bike weighs twice as much as my regular Specialized bike. I did the 100 miles though and kept up with my usual riding buddies, and they go fast. Yes I am definitely wanting to ride parts of the Tour de France route on my 1910 bike. Ah ha — maybe that is my next project. Stay tuned.
Cyclelicious: On “The Amazing Race”, numerous seasons have featured tasks that take place on a bicycle (biking to the finale finish line, carrying huge amounts of items on the back of a bike, and most recently, in Indonesia). Is there a certain thing that makes a bicycle great for tasks on the show?
Phil: You can weave in and out of traffic faster. It’s cheaper too. I guess the disadvantage is you don’t have a local driver who knows the way.
Cyclelicious: While hosting “The Amazing Race”, do you have time in your schedule to jump on a bicycle and explore cities/countries you visit?
Phil: You’re kidding aren’t you. I am happy if I get 2 minutes to myself to brush my teeth. We have no time for anything believe me. We’re on the go the minute we leave the US. It’s total sleep deprivation. You should try it!
Cyclelicious: Your life philosophy of “No Opportunity Wasted” is quite prevalent in your life. Can you explain how you came up with this way of life? Of all the items on your list of things to do in life, which have you enjoyed the most? Which have been the most difficult? Are there any you still haven’t accomplished?
Phil: When I was 19 and one of my first TV shoots, I was exploring by scuba a sunken cruise liner in New Zealand’s Marlborough Sounds. In one of the upturned interior cabins I got trapped and couldn’t find my way out. In the nearly pitch-black fjord water I got disorientated and my scuba tank had practically no air left. So I began to panic. I couldn’t find the way out in the dark so had to stay put. As my air started to go down I began to realize my next breath might be my last. A rescue diver was sent down to find me thank goodness and I was pulled to the surface. After the shock I reflected on where I was at and on how precious life is. I sucked in the O2 and the next day went back to the wreck and repeated my nearly fatal dive. I also began to write a list of all the things I wanted to achieve before I died. The list became known as “No Opportunity Wasted”. I worked through the initial list of 100 Things To Do, other lists evolved, which I did too. This has led to a life filled with adventure and few regrets. Riding across America was certainly one of the most difficult. I haven’t accomplished many as my list in constantly evolving. I want to add more things with my daughter before she goes off to college in a few years.
Cyclelicious: How many bicycles do you own? What are your favorite ones?
Phil: About 12 between my wife and I. I love them all for different reasons. Track, road, TT, Mountain, street, fixie, single speed, retro. What have I left out? Unicycle? Hmmm, that’s not me, but I would like to add that to my list.
Cyclelicious: You recently won a California State Championship. What category was this for?
Phil: There’s a great local series here in SoCal called CBR (California Bicycle Racing). It’s a grassroots race series run by Chris Lotts and his wife Vera. The crits are great and attract experienced riders. At the end of the race series CBR puts on a State Championship Crit. I entered the 40+ Cat 4-5. I train a lot but I hardly race. Ben, Mike and I teamed up and had the best time. We worked together really well and I found myself at the end in a good position, so I went for it. I love sprinting!
Cyclelicious appreciates Phil’s time in answering questions for this Q&A!
(Publisher note: And thank you to Michael Franken for doing this interview!)
Posted In celebrity
Tagged interview