California Assembly Bill 208 passed both the Senate and the Assembly and currently awaits a concurrence vote before heading to Governor Jerry Brown for his veto. The intent of this bill is to clarify the existing slow-moving vehicle law so that bicycles along with any other slow moving vehicle must pull over whenever five or more vehicles are piled up behind the cyclist on a narrow two-lane road.

As I explained last April, the existing slow-moving vehicle law, CVC 21656, already applies to cyclists, so this change is superfluous.

The original text would have been harmful to the rights of cyclists. Alan Wachtel of CABO worked with bill sponsor Frank Bigelow to dilute the language of the bill so that it has no net effect on the vehicle code.

Some observers believe this bill allows Bigelow and those who voted for AB 208 to point out they’re doing something for motorists in a way that doesn’t erode cyclists’ road rights. 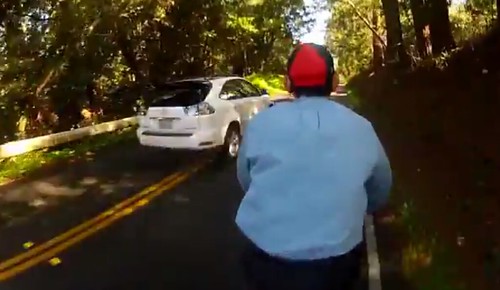 If Governor Brown hadn’t vetoed an earlier version of the three-foot passing law that allowed motorists to cross the solid yellow lines where it’s safe, as is the de facto practice for almost everybody besides a certain CHP officer patrolling north of Glendora, CA, we wouldn’t need silly political workarounds like this. Says Wachtel: “The long-term solution is to modify the law regarding crossing double yellow lines. I’d bet Bigelow’s constituents would like that, too. But it would require careful negotiation with CHP and Caltrans to avoid a veto, and it wouldn’t be a quick win for Bigelow.”