What do you think of the Bakfiets web home page? 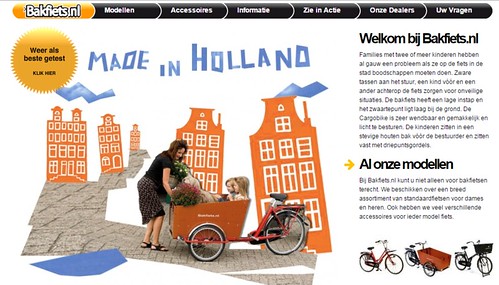 A few weeks ago, I watched and briefly participated in an online chat regarding the Bike Shops for Everyone report recently published by the League of American Bicyclists. Liz Cornish, who ran the League’s Women Bike program before becoming director of Baltimore’s bike advocacy organization last May, works to encourage the bike industry to reach out to a larger audience and to women in particular.

Let’s compare this Dutch web page against the large American specialty bike brands. Do these appeal to the 90% of Americans who don’t aspire to an extreme level of athleticism? 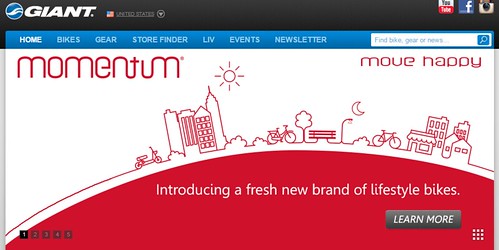 Giant Bicycles decided on a purposefully non-hardcore image for their recently launched Momentum Bikes with a friendly “Move Happy” message. Giant’s press material for Momentum seems to indicate their marketing is to the younger bike enthusiast crowd who want simpler, less expensive bikes, and they look to the future as they grow the pie and hope these new consumers will buy more later. The reaction from their dealer network, however, seems underwhelming. Some dealers seem to eschew the low margins from these bikes with an MSRP of under $500, and they fear these bikes degrade the Giant brand.

American bike revenue has remained flat for something like 30 years now, and the number of bike shops have dropped by 30 percent over the past 15 years, so I understand the pressure for high margin gear marketed to those with lots of disposable income. Specialized Bicycles is perhaps the largest example of a cycling industry brand focused on high margin products.

After experimenting with urban bikes and marketing to casual users a few years ago, Specialized Bicycles have reverted to their performance focused marketing. Men’s multi-use bikes are “ready for adventure.” Their women’s multi-use bikes push you to “Get After It!” in Lycra leggings on their comfortable and reliable bikes. You can “dial in your off-the-bike kit” with Specialized’s “lifestyle apparel” for both men and women.

Trek seems to take a middle ground with their City Bike web page showing a mixture of fitness riding in sporty apparel on paths mixed with urban commuters in street clothing.

Imagine you don’t strive for mileage and goals, but just want a bike to get around and maybe enjoy a little fresh air. Which marketing appeals to this version of you?