Happy Monday after my four day blogging hiatus. This 50 year old bridge over Calabasas Creek for Old Mountain View Alviso Road forms the boundary between the cities of Santa Clara and Sunnyvale, California. More about this bridge below the photo. 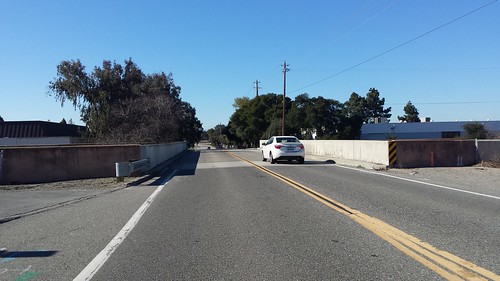 What is a BPAC?

Many city, county and regional transportation departments around the county have citizen Bicycle & Pedestrian Advisory Commitees (BPAC) and Bicycle Advisory Committees (BAC) to receive input on decisions that may affect bicycling when roads are built or “improved.” In the nine-county San Francisco Bay Area, transportation dollars are allocated by the SF Bay Area Metropolitan Transportation Commission. A written bicycle plan is one of the requirements to receive funding for bike projects in the Bay Area, and agencies must also have a BPAC to be eligible for certain state funds. The result is a plethora of opportunities for citizen involvement throughout the Bay Area.

In addition to cities, certain regional and state agencies such as the Santa Clara Valley Transportation Authority (VTA) and Caltrans have their own bicycle advisory commitees.

Bicycle access on Interstate 40 between Barstow and Ludlow California is on the agenda of the Caltrans Bicycle Advisory Committee coming up on Thursday, February 5. The old “Route 66” — now called the National Trails Highway (NTH) — is kind of the preferred bike route across the Mojave Desert between the Los Angeles area and Flagstaff, Arizona.

The severe storms across this region last September, 2014, washed out several bridges and portions of the roadway bed. The NTH is maintained by the San Bernardino County Department of Public Works. Because the county doesn’t have the hundreds of millions of dollars needed to rebuild this road and because an alternative is available in the form of the parallel I-40, the county’s work to re-open the highway has, understandably been slow and piecemeal.

Caltrans District 8, unfortunately, refuses to open I-40 to bicycle access in spite of the complete lack of a parallel route. They recommend cyclists take a huge detour to I-15, where cycling is allowed, through Las Vegas, or to contact the county and urge them to find money to fix their road.

The Adventure Cycling Association points out their concerns with D8’s suggestions. The California Bicycle Coalition and the California Association of Bicycle Organizations both plan to present the case of opening I-40 at the Caltrans Bicycle Advisory Commitee meeting coming up on February 5. They plan to ask Caltrans director Malcolm Doughtery — himself an avid cyclist — to order bicycle access on I-40 in spite of District 8’s objections. CBC and CABO point out that I-40 is a rural, low traffic interstate with wide shoulders and few exits. CABO also believes the I-40 prohibition may be contrary to California Highway Code 888, which seems to require bicycle access on Interstate highways where reasonable alternate routes are not available.

Adventure Cycling recently found bicycle access may now be allowed on some portions of I-40 in spite of Caltrans D8 letters to the contrary.

The small city of Campbell, California began construction on the East Campbell Avenue Portal Project, which is designed to improve access to the historic downtown core for pedestrians and cyclists with wider bike lanes and wider sidewalks where Campbell Avenue passes under Highway 17. Construction should end in August 2015.

Finally, the city of Campbell apparently plans to eventually connect to a planned extension of the San Tomas Aquino Trail with the city of San Jose. The city of Santa Clara has been extending the trail south, with work planned this year for the next leg from El Camino Real south to Homestead. I didn’t realize until I read the minutes that San Jose planned to connect to this trail, nor of this proposed link to Campbell.

Calabasas Creek forms the boundary between the cities of Santa Clara and Sunnyvale near the Bay. This two lane bridge was judged “structurally deficient” in 2005, and the cities allocated the $9M replacement cost for this bridge with construction planned for 2016. Pedestrians and cyclists enjoy sidewalks and bike lanes on the road, but the existing bridge necks down as shown in the top photo.

This road is kind of in the hinterlands, but there is significant pedestrian traffic to and from Marvell Semiconductor in Santa Clara, and the usual jackass driver behavior of going too fast in spite of the presence of people walking in the traffic lane.

Thank you to Matt Sparks of Campbell, Pete MacKay of the Santa Clara BPAC, Jim Baross of CABO, and Robert Prinz of Bike East Bay for the tips.