Richard MasonerMay 24, 20161 Comment on Bikes May Use Full Runway (Not)

As a teen I shared the road with military aircraft. This story of a guy who was knocked from his bike by an American Airlines flight at LAX reminds me of my own personal encounter with jet blast on a military base. 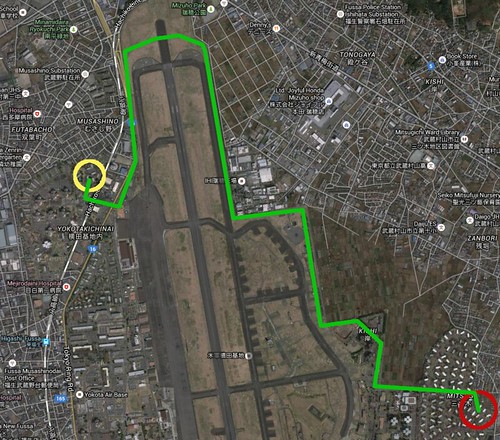 I grew up as a “military brat,” with my teen years spent mostly at a US Air Force Base in Japan. The yellow circle above (called the “West Housing Area,” because it’s west of the runway) shows where I lived, while some of my friends lived around the red circle (in the — you guessed it — “East Housing Area”). The green shows the four mile bike route from my home to my friends’ homes.

This perimeter road around the north end of this base crosses the 1000 foot long runway blast zone. Aircraft aren’t allowed here, but it’s paved because otherwise the constant jet blast would carve out a nice muddy valley in this zone. This is the area marked with yellow chevrons on this more detailed view grabbed from Google Maps satellite view. 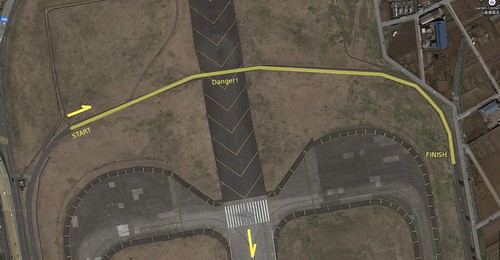 Automobile and bicycle access to this road across the blast zone is controlled by a traffic signal. Green means go, red means stop. If you run this light, you’ll get hit with blast from a military jet either taking off or landing. When the light runs red, a loud alarm bell also sounds continuously.

I was 16 or 17 years old and riding eastbound about 500 feet past the runway traffic light at the spot marked “Start” when I heard the bell begin to ring behind me. I saw the C-5A Galaxy — at the time the largest military cargo jet in the world — taxiing for takeoff 300 yards to my right. I was already near the runway overrun area, and after another couple hundred feet I’d be clear of the danger zone.

I know the airport controller saw me so I figure I’m safe. Instead, the 21 year old A1C in the tower apparently thought it would be hilarious to teach the kid on a bike a lesson and told the C-5A pilot to spin his 100,000 pounds of thrust into my face.

I didn’t get knocked off my bike, but the high speed wash of hot kerosene fumes wasn’t exactly pleasant. Grrr….

These days, I’m told a bike path more closely follows the fence to go beyond the blast zone and into the ALS. It adds about a half mile to the trip, but it’s probably worth avoiding the anxiety of sharing the road with military jet traffic.

A need for speed…

Old timers might remember the scene from the movie “Top Gun” when Maverick / Tom Cruise rides his motorcycle alongside a fighter jet. In the top map, you might see my green bike route parallels the east taxiway. The taxiway is almost immediately adjacent to this road. Fighter jet pilots generally taxi their jets at about 20 MPH on straightaways like this, so it was kind of fun as a teen to pretend to “race” my bike against F4 Phantom fighters. The fighter pilots were, without exception, much friendlier than pimply-faced senior airman.

In any case, this early and constant exposure to the sound of freedom might explain some of my carefree attitude about riding a bike in heavy, high-speed traffic.

One of those stupid teenage dare things was to drive your car in the middle of the night down the runway.

We didn’t have nuclear weapons at this base, and we weren’t in a war zone like our friends in Korea, so the security police didn’t have shoot-on-sight authority. Still, we’re talking about young guys with machine guns protecting multi-million dollar military hardware. I’ve never even been remotely tempted to try this, but one of my classmates was apparently egged into it during an episode of drunken stupidity, lost control of his car and was, unfortunately, killed. A military base is a like a small town, so everybody saw the sobering aftermath.

With a tip of the hat to Biking In L.A for the pointer about the LAX jet wash story.

If you’re curious about where I grew up, we apparently had a problem with zombies according to this manga series and this live action film adaption.