The Silicon Valley Bicycle Coalition San Jose Team meets tonight in the spacious offices of the All Power Bike Lobby local chapter at 96 North 3rd Street, San Jose CA. The lobby doors close at 6:30 PM so show up before that and follow the other bike hippies to the meeting location on the 3rd floor. 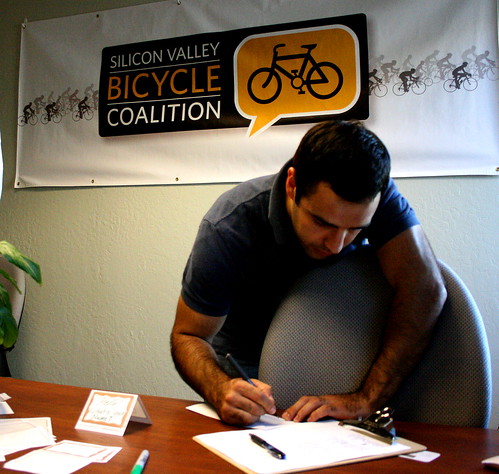 Some grad students from San Jose State University will talk about their recent report on Active Transportation improvements around the campus. We’ll also discuss the update on the Lincoln Avenue Road Diet for Willow Glen, which city council will vote on at their June 28 meeting.

I published a preview of the city’s findings about the Lincoln Avenue / Willow Glen road diet last month. You can find more details about the sales tax and traffic data in the DOT staff memo to council, in which DOT recommends making the road diet permanent. The gist of the memo is that traffic is safer, and the road diet did not negatively affect revenue for businesses on Lincoln Avenue.

This chart confused me at first — how is a 12.5% decline in sales tax revenue for the “Other” category not a bad thing?

It turns out 50% of that “Other” category is for the Rotten Robbie gas station on Lincoln at Garfield. You might recall gas prices plummeted a dollar — nearly 30% — between 2014 and 2015. $50,000 of sales tax collected by Rotten Robbie at 3.25% means customers pumped $1.5 million in gasoline from that station, which works out to 600,000 gallons of gasoline, which yields 5400 tons of carbon dioxide, assuming 100% of that gasoline is actually burned. (And somebody please check my hurried arithmetic.) But I digress.

San Jose City Council meets June 28, 2016 beginning at 11 A.M. There’s a lot of stuff on the agenda that day. Tranportation will come after ceremonial items, consent agenda, six different items under “Strategic Support Services,” and another six under “Community and Economic Development” before they get to the Transportation agenda, so it will literally be hours.