The San Francisco County Transportation Authority developed the CycleTracks app in 2009 to track bike trips, and other agencies around the nation have since adopted the same app to make spending decisions for bicycle facilities.

VTA says they will use app data to inform the County Bicycle Plan Update and improve the bicycle routing in VTA’s transportation modeling system. That system forecasts future transportation demand so their plans can adapt to anticipated changes. 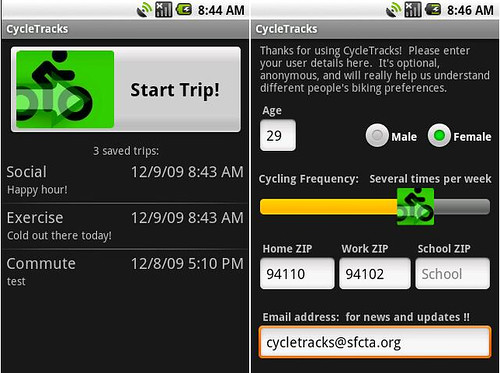 The app itself is rudimentary with a somewhat clunky interface. I think the hope is that everyday cyclists — i.e. people who normally won’t log trips with Strava or other athlete-oriented activity tracking tools — will use CycleTracks to log their trips. From the data I’ve seen from other regions using this app, usage seems to mostly be both long distance recreational riders and a few hardcore advocates. In other words, CycleTracks captures data from the same population that already uses Strava, Garmin Connect, and so forth.

People I’ve spoken with from these agencies tell me some demographics who are both more likely to ride bicycles who are also suspicious of government tracking activities will actively avoid using apps such as this.

Local bike advocates already plan to bring these shortcomings up at the next VTA BPAC meeting.

Still, if you want VTA to know where you ride your bike in Santa Clara County, I encourage you to submit your ride data to VTA. I’ve been doing this for the Association of Monterey Bay Area Governments for a few years now (though very inconsistently). The app seems to co-exist peacefully with other GPS apps on my Android phone.