There’s Keirin as the UCI and Olympic track cycling that most of us know about, and then there’s ケイリン Keirin, the Japanese gambling institution steeped in tradition.

As far as Japanese traditions go, Keirin isn’t that old at only 63 years old. It was established as a betting sport with a feel of western modernity in 1948 while still infusing Japanese elements. When you view this NOWNESS video on Japanese Keirin below, how many Shinto rituals and other Japanese customs do you see? How much do the scenes also remind you of American horse racing?

Us Americans have our own sports superstitions, and the Japanese are no different. When you see the rider sprinkling salt on the ground and his bike, he hearkens back to Shinto purification rites. Gamblers use numerology into the equation when they decide who to bet on. Until recently, Keirin “stables” were restricted to Japanese only, and even now Keirin team membership is restricted and competitive.

Keirin, as the most popular gambling sport in Japan, is big business. I’m in awe at the beautiful condition of the tracks shown in this video. Japanese cyclists can train and compete on a mix of 70 amateur and pro velodromes throughout the country. Compare against the 24 velodromes in the United States, almost all of which struggle to stay open and maintain their tracks.

If you want some of your own Japanese bike culture, take a look at this sumo wrestler bike bell! 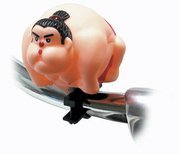