My goal for 2014: Ride very street in Santa Cruz, California. 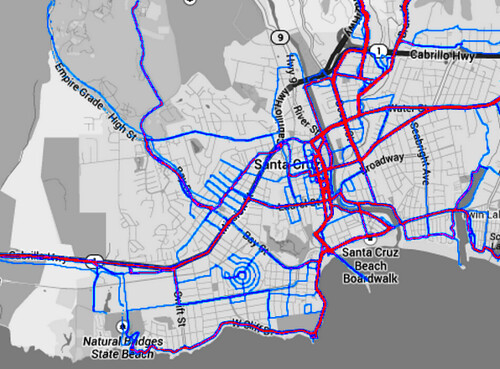 First of all a reminder: If you ride in the Monterey Bay region of California — the counties of Santa Cruz, San Benito and Monterey — please log your rides to Cycle Tracks Monterey. The regional planning agencies plan to use that data to prioritize spending for bicycle projects.

Once upon a time I knew a woman whose claim to fame (as it were) was knocking on every door in the city of Longmont, Colorado to tell people about the love of Jesus Christ. At the time there were about 72,000 people living there, which means roughly 20,000 doors to knock. She had lost her drivers license due to age-related vision problems years earlier, so she covered the 25 square miles of this Boulder County town on foot.

She passed about a decade ago so this was before GPS enabled mobile devices and tracking apps, but I’ve imagined her coverage map would look impressive if she tracked her mileage and coverage.

Shortly after I saw that, I rashly decided to set my goal for 2014: I will ride every street in the city of Santa Cruz, California. The map at the top of this post shows my progress as of yesterday afternoon. Red and blue means I’ve traveled that road. The gray lines are streets I’ve yet to cover.

I think it took Bret about a year to cover all 48 square miles of San Francisco. I’m discovering that even covering the 13 square miles in Santa Cruz is tedious. When I ride I normally just like to get from point A to B. If I’m going to make this goal I’ll need to get a lot more methodical, which means cue sheets to ensure I hit all of those unfamiliar roads.

After that… maybe all of Santa Cruz County? Santa Cruz is California’s smallest smallest county (after San Francisco) at 450 square miles.

How about you? Have you or anybody in your area covered every street on your bike in a nearby city?