Last Friday, I watched and briefly participated in an online chat regarding the Bike Shops for Everyone report recently published by the League of American Bicyclists. Liz Cornish, who ran the League’s Women Bike program before becoming director of Baltimore’s bike advocacy organization this month, works to encourage the bike industry to reach out to women.

American bike revenue has remained flat for something like 30 years now, and the number of bike shops have dropped by 30 percent over the past 15 years, so I understand the continued move to high margin gear marketed to those with lots of disposable income. In her report, Ms Cornish points out that we should take a better look at how the bike industry stupidly shoots itself in the foot with very basic mistakes that exclude many women from shops.

There’s a lot of good stuff to dive deep in this report, but this week I’ll compare how cycling is represented in online marketing in the USA versus other cultures around the world.

In the online discussion, some women pointed out the overtly masculine imagery in online bike marketing from the major brands. Websites appeal to athleticism, competition, and fitness. On the right bike with the right gear I can go long, I can go fast, and I can go hard. Go Team!

How does that compare to the online marketing from the world’s largest bicycle manufacturer? Hero Cycles in India manufactures over 5.6 million bikes each year. They own half of the market in their home country, and export a fourth of their production to the rest of South Asia and Africa.

With increasing prosperity in India, Hero has seen sales decline sharply. Domestically, Hero is considered a poor man’s bike, and Hero struggles to continue with their affordable standby models while designing specialty models with an aspirational appeal. When you visit their website, you see an image that almost looks lifted from an American bike website. The banner advertises adventure on what appear to be high end mountain bikes with fit men (and one woman) in form-fitting kit on their way to conquer a remote mountain trail.

Below that, however, Hero embeds this video ad portraying professionals and students using bikes for transportation and fun. The models are all young and attractive to be sure, and there’s a lot of male gaze in this video. The ad is kind of a confusing montage that I think is meant to portray and variety of uses for their bikes, but I’m still not sure who the intended target of this ad is. While this video shares many of the same patriarchal assumptions dominant in American advertising, note the complete absence of efficiency, gear ratios, weight, speed, or athlete endorsements.

The other large Indian bike company is Tube Investments of India, which sells bikes under the Hercules and BSA brand names. Hercules are your basic crappy mountain-style bikes, while BSA are eminently functional utility bikes. Their websites reflect their target audiences. 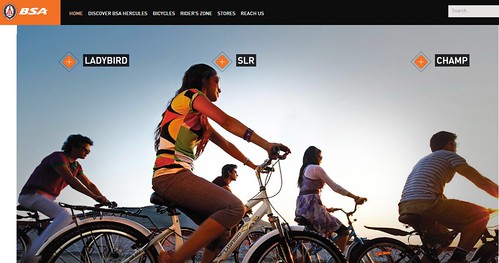 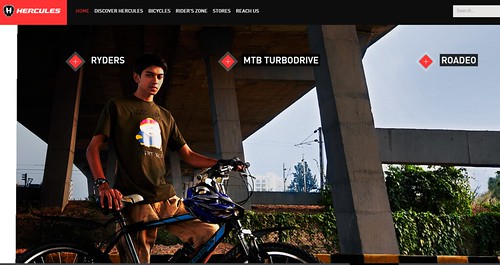 Unlike the Western bike market, BSA and Hercules don’t redesign new models every year. The BSA Photon hasn’t changed since its introduction in the 1970s. Their Ladybird women’s bike is at least a decade old, but they still produce newer ads targeted to young women.

Hercules ads are notable for their extreme campiness from an American perspective. It’s all bro culture here.