Three years ago, Shuichi Kobayashi was riding his ‘mamachari’ bicycle around Kyoto when a gaikokujin (foreigner) woman asked where she could buy one of the distinctively Japanese utility bikes. Today, he blogs about the “mama bicycle” to get the word out about these Japanese utility bicycles. Mamachari (ママチャリ) is a wonderfully descriptive combination of two English words — “Mama” and “Chariot” — that results in a uniquely Japanese portmanteau. This “mama’s chariot” describes a slow, heavy utility bike outfitted with chainguard, fenders, rack, skirt guard, dynamo lights, baskets, and child carriers. They universally have step through frames. Don’t think of your typical Dutch bike, however: the function is the same, but there’s a Japanese style to these bikes. They tend to cost much less than European city bikes, with prices ranging from about $100 to $300. Mamachari form as much a part of Japan’s transportation culture as fast cars in America or nicely dressed bike riding women in Copenhagen. In Japan, the word prompts thoughts of a housewife pedaling her heavy three speed on the sidewalk laden with her two small children and shopping bags. It’s not unusual, however, to see the elderly of either gender, teens, and visiting American tourists riding one of these bikes. 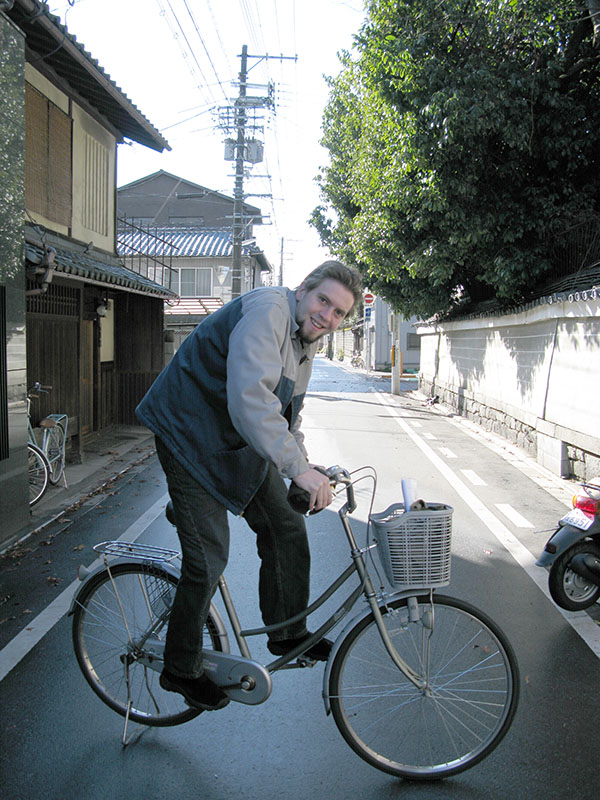 I used to run to the grocery store on my mother’s mamachari as a teen in Japan. Dads like Shuichi Kobayashi also ride these “women’s bikes” with children on board.

Shuichi explained to me that he first started thinking about bringing attention to mamachari after his encounter with the Western woman. The idea gelled further over this last year as he taught himself English. To practice his English skills and talk about his favorite mode of transportation, he started his Mama Bicycle blog last month.

Image credits: Mamachari diagram from a now defunct “Guide to Commuting By Bicycle” in Japan; Mamachari photos via Creative Commons licence / click through on photos for details; the American tourist is from Slonie and used with his permission — see his Cyclocross comic; Dad & Daughter is “Mama Bicycle” blogger Shuichi Kobayashi and one of his daughers.