“San Francisco has too many hills and too much traffic to be enjoyable and safe for cyclists.”

Or: “The Urban Myth that desperately needs to be exposed for what it really is: a myth.”

San Francisco has long been a great place to ride, and broad-spectrum bicycle infrastructure upgrades have made it even better in the past few years. Miles and miles of new, clearly-marked bike lanes, traffic calming measures, bike boxes, and designated routes that avoid busy streets and go around the steepest hills are just some of the things cyclists in the City by the Bay are smiling about.

One of the oldest and most used of the designated routes in SF is the “Wiggle” . END_OF_DOCUMENT_TOKEN_TO_BE_REPLACED 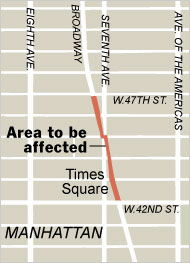 N.Y.C. is considering blocking off several sections of Broadway in Manhattan, including Times Square. The most intriguing section of the article is this:

Although it seems counterintuitive, officials believe the move will actually improve the overall flow of traffic, because the diagonal path of Broadway tends to disrupt traffic where it intersects with other streets.

Posted In calming | planning | traffic
Manage Cookie Consent
To provide the best experiences, we use technologies like cookies to store and/or access device information. Consenting to these technologies will allow us to process data such as browsing behavior or unique IDs on this site. Not consenting or withdrawing consent, may adversely affect certain features and functions.
Manage options Manage services Manage vendors Read more about these purposes
View preferences
{title} {title} {title}