The part-time bike lanes on Homestead Road through part of Sunnyvale, CA are up for discussion at the November 17, 2015 city council meeting. 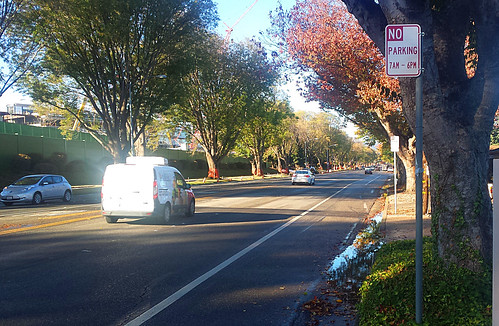 END_OF_DOCUMENT_TOKEN_TO_BE_REPLACED

Do you remember that shared lane lane with green painted along 2nd Street in Long Beach California way back in 2009?

The city of Oakland is apparently painting part of 40th Street with green. The East Bay Bicycle Coalition calls these Supersharrows, and wants to know what you think of them.

Supersharrows are essentially sharrows with a vibrant punch! These are not bike lanes where bicyclists have priority over cars, but rather a shared space for both users, with a visible reminder to driviers to look for bikes.

Ride the supersharrows and tell us what you think. If successful, Oakland intends to stripe more on streets such as MacArthur Blvd in the Laurel District, Harrison St toward Piedmont, Market St north of Adeline St, a couple blocks either way at Broadway & Grand, and Lakeshore Ave east of El Embarcadero.

Here’s Market Street Oakland as it appears now, and with a strip of green.

Update: You’ll see comments below that the green lane should be centered more in that right hand lane. I’ve since modified my rendering to better reflect what Oakland plans for Market, although I think I probably made the green portion a little bit too wide.

END_OF_DOCUMENT_TOKEN_TO_BE_REPLACED

Tonight, the city council for Sunnyvale, California will discuss a city staff proposal to add bike lanes to a one mile segment of Duane Avenue between Stewart Drive and Fair Oaks Avenue. Space for the lanes will be made by removing some street parking and reducing the stroad from four lanes down to three.

Currently, Duane Avenue is 72 feet of two parking lanes and four 12-foot-wide travel lanes, as shown below. (And please never mind the backwards parking on the right hand side – mistake on my part!) END_OF_DOCUMENT_TOKEN_TO_BE_REPLACED

I’m digging through old issues of LIFE Magazine for mentions and photos of people on bikes and found this interesting bit about Bike Month activities in 1963. END_OF_DOCUMENT_TOKEN_TO_BE_REPLACED

The Sunnyvale City Council approved a plan to remove street parking and replace that with bike lanes on El Camino Real (ECR) between Sunnyvale Avenue and Remington Drive during their meeting on July 23, 2013.

ECR is a six lane traffic sewer in this part of Sunnyvale. This half mile segment of bike lanes will be the very first bike lanes painted into this historic highway in Santa Clara County. Because this state highway is under Caltrans control, the city could only obtain permission to stripe ECR if they removed street parking. The below map shows existing bike lanes in blue and the new proposed lanes in green. Click through to Google Maps for the larger geographic context.

END_OF_DOCUMENT_TOKEN_TO_BE_REPLACED

Posted In facilities | news
Tagged Sunnyvale
Manage Cookie Consent
To provide the best experiences, we use technologies like cookies to store and/or access device information. Consenting to these technologies will allow us to process data such as browsing behavior or unique IDs on this site. Not consenting or withdrawing consent, may adversely affect certain features and functions.
Manage options Manage services Manage vendors Read more about these purposes
View preferences
{title} {title} {title}