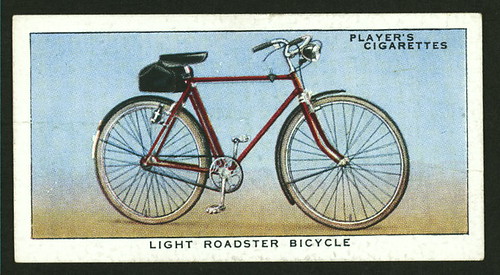 END_OF_DOCUMENT_TOKEN_TO_BE_REPLACED

There’s only one way they [i.e. avid, lycra clad cyclists] can be defeated. And that’s for normal people to start riding bicycles. We need to swell their ranks with moderates, people who ride a bike because they’ve had a drink and because taxis are too expensive. Ordinary people who ride in jeans and T-shirts and with no stupid helmet.

John O’Groats to Lands End is the traditional traversal across the length of Great Britain — from John O’Groats at the extreme northeast in Scotland to Lands End in the southwest of Cornwall, England. The Deloitte Ride Across Britain is a 9 day, fully supported bike tour in which you and hundreds of other cyclists can participate in the challenge of riding Britain from end to end.

I’ve noticed that the Google Maps team has been quietly building up their database of cycle tracks, cycle lanes and bike routes throughout the United Kingdom. Google is now augmenting that with a complete map of British Waterways’ bridges, locks and 2,000 miles of towpaths.

END_OF_DOCUMENT_TOKEN_TO_BE_REPLACED

London Mayor Boris Johnson gave a specially made tandem Boris bike as a wedding gift to Prince William and Kate Middleton and released this video for them on YouTube.

“I look forward to seeing the newly-weds on tandem wheels as they start their new life in Anglesey,” said Johnson when he unveiled the gift.

Photos of the bike and Bixi bike build details from Carlton Reid in the UK.

Posted In uk | United Kingdom
Manage Cookie Consent
To provide the best experiences, we use technologies like cookies to store and/or access device information. Consenting to these technologies will allow us to process data such as browsing behavior or unique IDs on this site. Not consenting or withdrawing consent, may adversely affect certain features and functions.
Manage options Manage services Manage vendors Read more about these purposes
View preferences
{title} {title} {title}