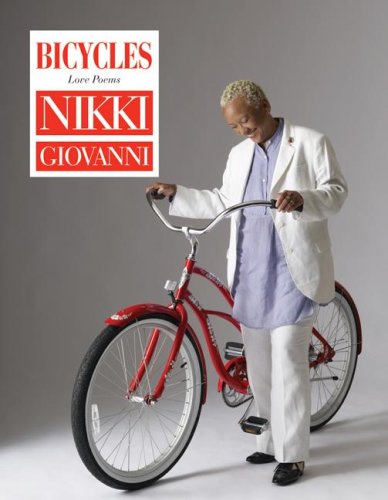 “Bicycles” by Nikki Giovanni from her book Bicycles Love Poems

Midnight poems
Sing a sweet song
Saying everything
Is all right

The dog thinks
I need a kiss

All day long I wait
For the sunset

The first star
The moon rise

Nikki Giovanni is Distinguished Professor of English at Virginia Tech, where she had Virginia Tech shooter Cho Seung-Hui in her poetry class and said she knew immediately it was Cho when she heard about the April 2007 shootings.

She opens and closes Bicycles with reflections on the shootings at her campus, filling her book with the idea that love can bring hope out of tragedy.

In her book of poems, the bicycle is a metaphor for life. The wheels represent tragedy and trauma, because they’re always there on the bike spinning. Falling and pain is inevitable as you learn to ride a bike.

In an interview with Bill Moyer, Giovanni says, “When we see the messengers on that bike, that’s just trust and balance. They just say, ‘I’m coming at it. I don’t care if the cars are going to swerve, I’m …’ It’s beautiful watching them on their bicycles. But we do that in our relationships. It’s the same bike. We are continuing relationships through trust and balance.“

Watch Giovanni’s interview with Bill Moyer or the read the transcript.