I attended colleage in far away Texas when the Loma Prieta quake shook the Monterey Bay and San Francisco Bay areas on this day in 1989. Disaster preparedness officials and local media are using the opportunity of this quarter century anniversary to remind people of the day when shaking famously interrupted the World Series game at Candlestick Park, and infamously knocked down portions of the Oakland Bay Bridge and the Cypress Viaduct. 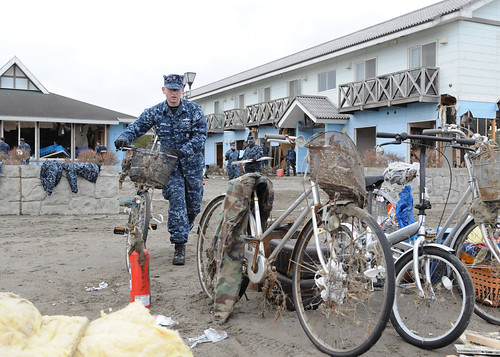 I cross the San Andreas Fault twice daily during my commute. The 1989 quake damaged a section of State Highway 17, which is the main north-south route between Santa Cruz and San Jose, and rendered this road unusable for a month. The Highway 17 bus service I ride today began because road repairs severely restricted this highway’s capacity.

I fully expect another major quake will disrupt road transportation to my home, so my disaster preparedness includes biking the entire 32 miles over the Santa Cruz Mountains to home from the office. My recreational rides up and over the mountains double as disaster preparedness drills. I fully expect to have to walk past damaged road segments, but carrying my bike is much easier than carrying a car or SUV around an obstacle. 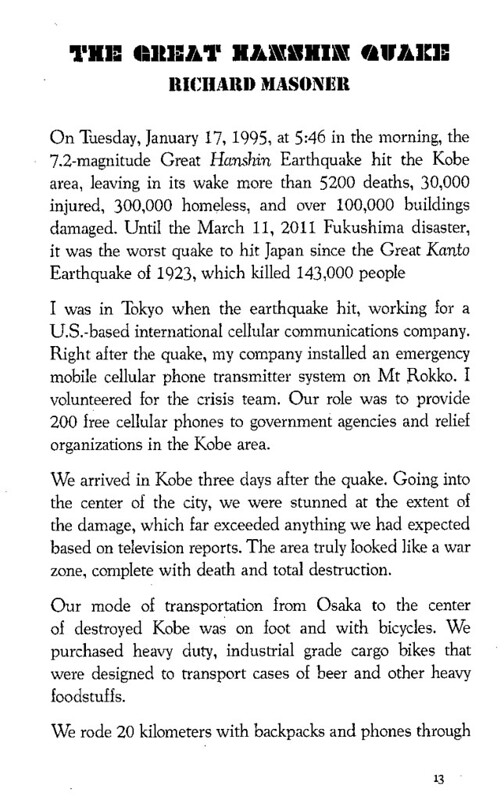 You can read the full story in Elly’s Disaster zine, which can be yours for as little as $5. My dad’s story is the coolest one in there, but the stories are all worth reading.

I included that photo of the bikes in Misawa, Japan, incidentally, because my retired parents now live in far northern Japan, where the 2011 Tohoku Earthquake and Tsunami devastated much of the Pacific coast of northeastern Japan. My parents sat tight for a day in their solar and wind powered home. After that, my dad (then age 70 years) volunteered with cleanup efforts at Misawa, where he bumped into an old high school classmate of mine, Colonel (now General) Mike Rothstein, commander of the 35th Fighter Wing based out of Misawa.