Richard MasonerApril 1, 20141 Comment on A word about pedestrians, downtown streets and paths

Note: I’ve re-read this stream-of-consciousness a day after writing it and it’s incomprehensible! I think the takeaway (if there is any): Public roads as shared space for all users still exist in the United States in spite of propaganda to regulate road use and criminalize anything other than vehicular traffic.

Public roads are shared space for use by all

Michael Andersen is a staffer for the People for Bikes Green Lane Project. He writes tongue-in-cheek about vehicular pedestrianism and abolishing sidewalks for an April Fools joke.

Sidewalks are separate and unequal, and they are death traps with the risk of right and left hooks! Pedestrians just need more education about the proper way to walk. Then they would be perfectly safe, and respected by motorists.

A few people left comments reminding readers that pedestrians did, at one time, rule the road. I and others have covered the history of a persistent marketing campaign that eventually led to the criminalization of walking, a practice that was considered normal and civilized a little over a century ago in this country.

And so, we have sidewalks. And what lovely, inviting places they are for pedestrians. See, for example, what Molly Millar and Momentum Magazine Editor-in-Chief Mia Kohout saw on their recent walking tour of Fort Worth, Texas.

Or how about Denver’s 16th Street “Pedestrian” Mall, where more right-of-way is dedicated for the “Mall Ride” buses and their dangerously aggressive drivers than for pedestrian space, and woe betide clueless visitors like me who take the “pedestrian” claim seriously? (Hint: the psychopath bus drivers run you down, because pedestrians don’t belong).

Now, consider this typical scene in downtown Santa Cruz, Calfornia. People on foot walk willy nilly across the street. People in cars drive slowly and watch for pedestrians. On this street, you almost never experience the car-vs-bike aggression that Houston police officer Stephen Klein describes in his city. 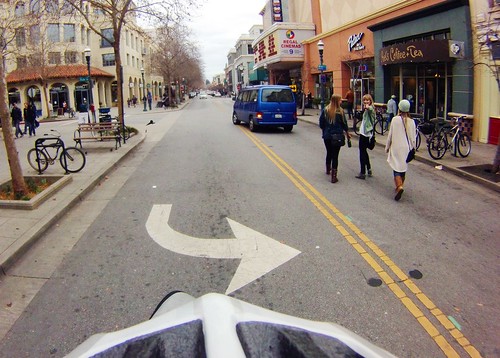 I see a similar thing through the transit zones in downtown San Jose. Drivers there aren’t quite as careful as in Santa Cruz, but they kind of get the idea. People cross 1st and 2nd Streets mid-block, especially the light rail stations. Technically they’re jaywalking, but I think this behavior is normal and should be expected by drivers in pedestrian heavy areas. There are also a fair number of homeless people pushing carts piled enormously high with their belongings with absolutely no regard for traffic signals, in spite of Jeremy Clarkson’s pleas to the contrary. They and the drunks stumbling from the bars on the weekends act as a kind of 3rd generation traffic calming. 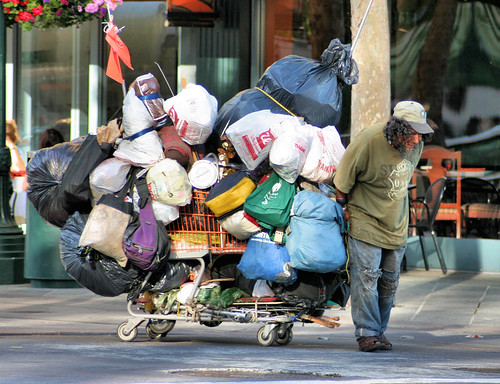 Don’t get the wrong idea: Sidewalks are important on modern roads for pedestrian safety and access. There’s a wrong way (as illustrated by the Fort worth example) and a right way (Denver’s 16th Street is mostly okay, in spite of my griping, but it can be better). While people should be able to walk across the street without feeling like they’re a frog crossing the road, they mostly shouldn’t just impede traffic for the sake of getting in the way of traffic. Unlike what some people like Ray Keener might claim in their straw-man version of my vision to improve roads for all users, that’s not what I’m about.

I think this idea that people should follow the rules of “vehicular pedestrianism” is behind the stupid path rage we sometimes see (and are sometimes guilty of). Jogger on the wrong side of the path? Buzz by too closely to teach them a lesson! Leash too long? Kick the dog! Moms in yoga pants taking up the entire path as they talk to each other? Honk your evil Airzound horn and laugh as they soil their too-sheer Lululemons.

If you’re in a pedestrian zone, pedestrians are the more vulnerable user when you’re on a bike. Pedestrians reign on multi-use paths, and people on bikes have no expectation to ride fast on such paths, the same way motorists should slow down when driving through pedestrian heavy zones.

In summary: Be civilized and slow down around pedestrians, whether you’re on bike or in a car.