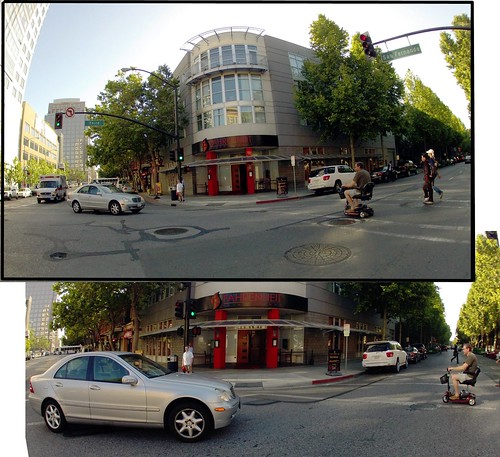 A Watsonville police officer testified in the hearing that he saw Alcala-Valador speeding down Main Street in Watsonville. He pulled out to stop and cite her for speeding when Alcala-Valador saw a traffic light ahead turn yellow. She allegedly sped up to catch the light, which turned red before she entered the intersection. The driver then left 50 feet of skid marks on this 25 MPH street in a downtown area with heavy pedestrian traffic, where she struck a 10 year old boy, who now has permanent brain damage.

The defense attorney said a lot of the things you often hear at collisions like this: the driver did everything right — she wasn’t impaired by drugs or alcohol, neither was she texting or talking on her phone. “This was a tragic accident with tragic results,” he told the Santa Cruz Sentinel.

The prosecutor’s office disagrees, as does the judge in the preliminary hearing. “If this isn’t reckless driving, than I don’t know what is,” says Assistant District Attorney Greg Peinado.

Compare against George Gascon’s office in San Francisco, which declined to file charges against Gilberto Alcantar, who fatally hooked a cyclist with his truck last May, because “we are unable to prove this case beyond a reasonable doubt.”

Compare also against the Contra Costa County attorney, who also fails to prosecute when a driver plows into a pedestrian in the crosswalk because the case is not “winnable.”

This morning’s targeted enforcement against kids on bicycle in Palo Alto reminds me of this incident, in which the Santa Clara County attorney declined to prosecute a man driving on a suspended license at least 10 MPH over the limit in the bike lane while he was high on meth because “we could not find a single case where similar driving was found to be reckless.” The boy was riding a bike in the bike lane when the driver, Luis Felipe Hau, steered his Nissan Quest minivan into the boy, sending the boy to a long-term rehab facility.

The big news this past week has been the LA County Attorney’s failure to file charges against the deputy who killed cyclist Milt Olin when Deputy Wood failed to control his vehicle while typing into his computer.

And remember, there’s a protest ride beginning at 4 PM tonight.

If you want to avoid criminal prosecution for what you might think of as minor traffic infractions, don’t drive like a sociopath. Bob Lee in Santa Cruz easily won this year’s election, but he’s reportedly suffering from an undisclosed illness so we’ll see what happens.