Via Streetsblog comes this look at traffic volumes in Minneapolis before and after bike lanes are installed.

There’s discussion about the level of congestion on the roads in question, but to sum up: removing lanes from over-capacity roads in Minneapolis doesn’t result in congestion.

I made a similar point about Hedding Street in San Jose, California earlier this year:

In 2012, the city of San Jose proposed a traffic calming 4-to-3 lane reduction for Hedding Street, an important east-west arterial that carries 16,500 vehicles per day. The Transportation Research Board Highway Capacity Manual shows three lanes is plenty for that kind of traffic volume, although the city did predict increased congestion during the peak commute at a couple of intersections.

Below are images of Hedding Street looking west before and after the road diet. Note the almost complete absence of traffic in both instances. Both photos were shot at about 9 AM on a weekday. 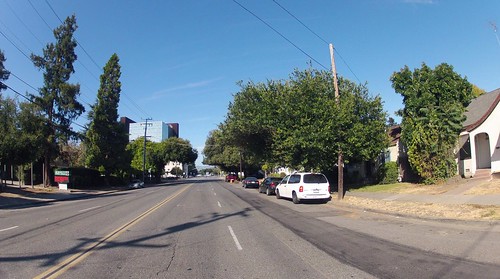 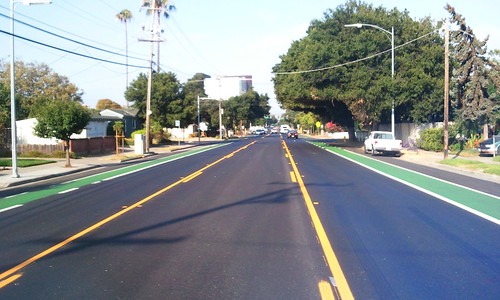 San Jose DOT have a traffic count planned for Hedding Street so we can see before and after numbers, but a quick look shows that traffic volume is essentially unchanged since the green lanes were added, while travel times have increased on the order of seconds, and only during the 45 minutes at the morning and evening commutes when there’s actually any traffic on Hedding. For 22 ½ hours of the day, traffic still proceeds nearly unimpeded down the length of Hedding Street between 1st Street and 17th Street.

Those few seconds of extra travel, however, resulted in a brief political storm for those running for mayor of San Jose. Suburban candidate David Cortese says that calming traffic and improving safety and livability for the residents along Hedding is evidence of an “out of touch” administration. He believes the city should have retained 200,000 square feet of real estate — that’s four and a half acres worth of right-of-way — for the six percent of the day when it’s needed for automotive traffic, just so Cortese could save five seconds on his 15 minute commute from his home in Evergreen to his office at the County administration center. Can you say government waste, boys and girls?