California Senator Mark DeSaulnier made a slight amendment to SB 1183, his California bicycle Tax bill. Can you spot the change?

This is the bill that would give cities, counties and park districts authority to levy a sales tax on new bicycles. A hearing is scheduled for Wednesday, April 9 in the Senate Governance and Finance Committee.

DeSaulnier introduced the bill at the behest of the East Bay Regional Park District (EBRPD), which spends 5% of its $200M annual budget on acquisitions and capital projects like paving bike trails. Tax revenue for EBPRD has dropped by nearly 50% since 2009, and project funding has been cut similarly.

Senate committee legislative analyst Colin Grinnell notes a handful of drawbacks for SB 1183. Sales taxes are collected by the California state Board of Equalization (BOE). Currently, park districts are not authorized to collect sales taxes, so the BOE does not maintain a database of park district boundaries for the purpose of determining which retail outlets should pay sales tax to the park district. If SB 1183 becomes law as written, the BOE would be required track those boundaries and make a list of all bike selling retailers in that park district. The EBRPD encompasses all of Alameda and Contra Costa counties, but not all California park districts have such simple boundaries. 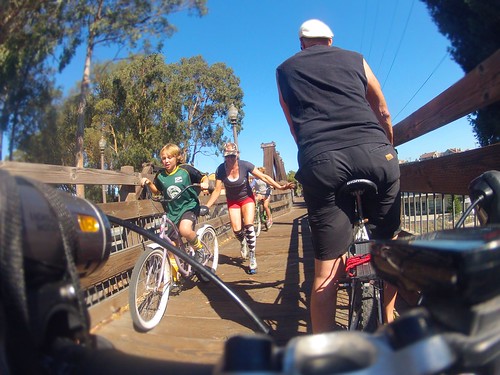 The slightly bigger problem: the legislative analyst wryly notes, “the total proceeds of SB 1183’s tax may not cover BOE’s administrative costs.” Grinnell then suggests an alternative: amend the current “pleasure riding tax” to include bicycles. California parks are currently permitted to collect a fee of up to $10 from mule and horse riders on public trails. Grinnell suggests applying this fee to bike riders, too. Note that the EBRPD maintains trails useful for transportation as well as recreational trails.