I’ve made a number of long overdue tweaks to this website and the various information service I offer that hopefully will improve response times and usability for you. 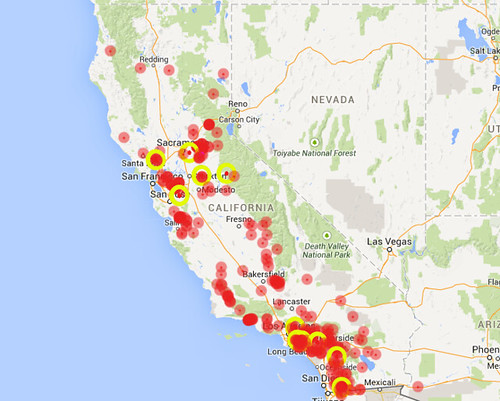 When I first wrote the CHP Bicycle Incident Robotweeter in 2010, geocoding consisted of grid references to paper maps books published by Thomas Brothers. There wasn’t a good way to convert the provided location data into a computer friendly form, so my attempts to map these crashes were crude at best.

I very recently noticed that the CHP now includes latitude / longitude information in their dispatches. I’ve changed the robotweet code to use this information where available. Anything captured from before yesterday still contains potentially bad data, so I’ve modified the mapping program to ignore any locations that fall outside of California. Anything captured after last night should contain good location data. You can view the 2014 California bicycle crash map right here. Bullseyes highlighted in yellow happened within the past 24 hours. Pink markers happened in the past week. Everything else occurred at least a week ago.

I also now attempt to flag those incidents that may involve a motorcycle. A simple text search through the dispatches includes a match for “bike,” which dispatchers might type for either motorcycles or bicycles. I added additional heuristics to guess if it’s a motorcycle instead of a bicycle.

The geocoding hack mentioned above also applies to the tweets. When you click “Search Google Maps for this incident,” you’ll now land on the precise map location of the reported incident. One future improvement is a reverse geocode so the tweet names the city of the crash, instead of the CHP district office the dispatch originates from.

Finally, I plan to use the Google Maps Static Map API to automatically integrate an image of the crash location in both the tweet and on the incident permalink record page.

Cyclelicious has been super slow for the past couple of years. With some good advice from Chris Davies, I made some tweaks to Cyclelicious this website that I hope improves response times and usability for you. Let me know if you think it makes a difference or not.