Richard MasonerMarch 27, 20142 Comments on Bus or bike to Devil’s Slide

San Mateo County Parks in California opened the brand new Devil’s Slide Trail to the public at 1 PM today. The trail was formerly a section of California State Route 1 and offers access to stunning views of the Pacific coast between the cities of Pacifica and Half Moon Bay south of San Francisco.

That treacherous old stretch of Highway 1 at Devil's Slide is now a recreational trail. It opens Thursday. pic.twitter.com/Koqc1iWlnD

Parking at the trailheads is limited. Here are some alternative means of transportation.

SamTrans Route 17 added a new stop at the south trailhead on either side of Highway 1. Route 17 travels along the coast between Half Moon Bay and Pacifica. During the week, the bus runs roughly once every hour between 6 AM and 8 PM. On weekends, the bus runs once every two hours from 6 AM to 8 PM.

To access the Pacific Coast side of San Mateo County from the Bay Side, ride SamTrans route 294 from Hillsdale Caltrain or ECR.

There is no direct public transportation between Santa Cruz County and San Mateo County. From Santa Cruz, the furthest you can travel is to Davenport on Route 40 or 42. Route 40 also serves Waddell Beach once per day on the weekends. Route 41 will get you as far as Bonny Doon Road. From Davenport, it’s a 45 mile hike or bike ride up Highway 1 to the nearest SamTrans bus stop in Half Moon Bay.

The city of Pacifica operates a free weekend shuttle that operates hourly and serves Devil’s Slide. The shuttle runs from 8 AM to 4 PM, running every hour on the hour from the Linda Mar Shopping Center. It first travels north through Pacifica to Oceana High School and Oceana Terrace, where the shuttle turns around for the return trip. It stops finally stops by the north trailhead for Devil’s Slide before returning to the shopping center. Unfortunately, I’m not sure where you can park in Pacifica besides the Park and Ride at Linda Mar. If somebody with better local knowledge knows I’ll be happy to update this information.

SamTrans, Santa Cruz Metro, and the Pacifica Shuttle are all equipped with bike racks. Space is limited.

This is a bicycle blog, so of course I’ll post bicycle directions. 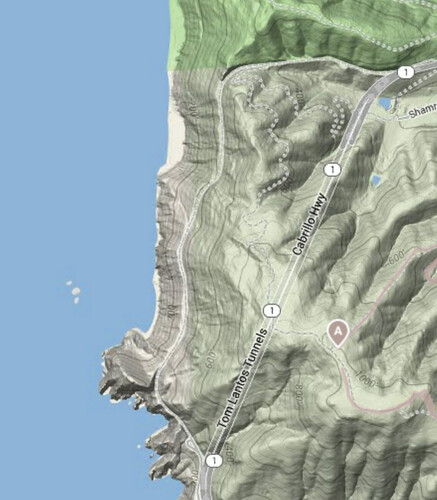 First a note of caution: All roads to Devil’s Slide are heavily traveled public highways which may or may not be easily shareable. You should be confident in your road riding abilities and have the endurance to ride safely for long distances on varying terrain and road conditions. On the coast you’re riding along the San Gregorio Fault Zone; from San Francisco you also cross the San Andreas Fault, so expect hills.

From San Francisco: The standard route starts from the vicinity of Lake Merced / San Francisco Zoo. You make your way to Skyline Drive, cut to Palmetto Avenue after FDR Elementary School, and before long you’re at Sharp Park Golf Course in Pacifica. You’ll share the highway for a short segment. At Reina Del Mar, you can either stay on the highway or take sidepaths to Linda Mar Blvd, depending on your preferences. South of Pacifica, you’re back on the highway again until you reach the north trailhead on your right. Google Maps directions here or follow these Map My Ride directions and stop when you reach the trail. Distance from the San Francisco Zoo is about 14 miles to the north trailhead one way.

From Santa Cruz: It’s a straight shot up from Santa Cruz to Devil’s Slide on Highway 1, with surface streets and trails available around Half Moon Bay. You cannot get lost: if the big ocean is to your left, you’re going north; if it’s on your right, you’re going south. Highway 1 mostly has decent shoulders, though there are segments where the shoulders may be covered in sand or debris. This is a metric century of riding each way, so be sure you’re up for that distance. You can take food and nature breaks at Davenport, Waddell Beach, Año Nuevo, Gazos Creek, Pigeon Point, Pescadero and Half Moon Bay. Prevailing winds are from the north and increase steadily through the day, so start early.

From the Bay Side of the Peninsula: The usual route is to make your way to Skyline Boulevard in the Santa Cruz Mountains, head west on Sharp Park Road, then down to Highway 1, turn south and continue to the Devil’s Slide Trailhead. From Palo Alto, this is about 35 miles of riding one way. Crossing the mountains using La Honda Road to the coast adds about 10 miles to the trip each way and significant elevation gain.

How long before we see a Strava Segment along this beautiful trail?