Golden Gate Bridge District staff float a proposal to charge a toll for walkers, skater and cyclists who cross the iconic span between Sausalito and San Francisco. 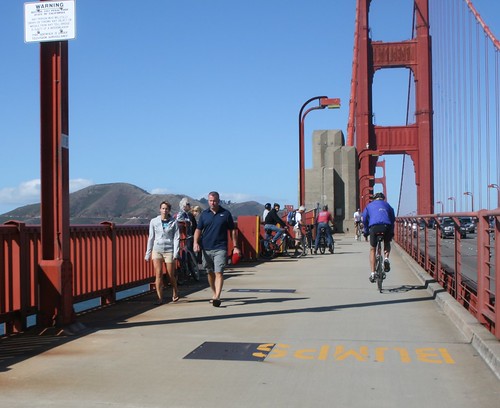 On Monday the [Golden Gate Bridge] district released a 45-point plan to keep the agency solvent in the next five to 10 years as it grapples with a five-year, $33 million deficit.

Among the initiatives: “Evaluate sidewalk access fees” for bikes and pedestrians, which could be implemented in 2017.

“It is by no means set in stone. It’s just a concept right now,” says district spokeswoman Priya Clemens.

An estimated 6,000 cyclists and 10,000 pedestrians cross the the Golden Gate every day. When the Golden Gate Bridge district last considered a sidewalk toll ten years ago, they estimated an annual take of $500,000 to $1.5 million. The Marin Bicycle Coalition say they vehemently oppose such a toll, even for tourists and other occasional users.

110,000 vehicles crossed the bridge daily in fiscal 2013. Vehicle tolls currently generate a little over $100 million annually for the bridge district, with another $30 million from transit fares, $15 million from operating assistance grants, and $20 million in “other” revenue such as advertising and investment income. The bridge district began charging $20 per month for parking at their Larkspur ferry terminal earlier this year.

The district will spend $115 million to operate their transit service this year, $23 million on transit capital, $70 million for their bridge operating expenses, and $45 million on bridge capital expenses.