Happy Wet Wednesday, all. I was late for San Jose Bike Train this morning due but rode with Ian. 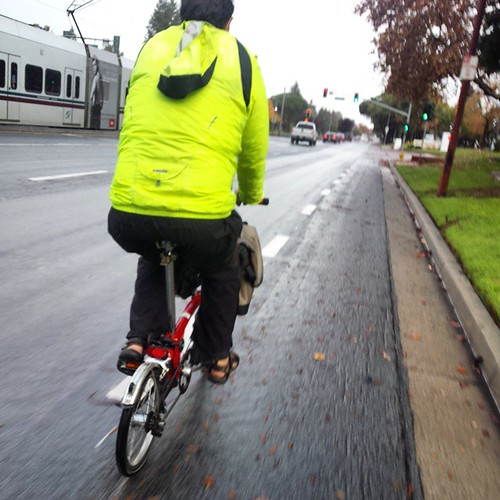 The San Jose, California City Council met yesterday afternoon to vote on the much discussed sidewalk cycling ban for downtown San Jose. The proposal eventually created by staff bans sidewalk riding on San Fernando, First, Second, Third and Fourth Streets through the downtown area. They finally voted on it about 6:30 PM last night after dozens of people spoke on the issue. Council voted unanimously in favor of the ban. Council also announced their intention to revisit the issue for Santa Clara Street after transit improvements are completed their. Merc-News opinion writer (and long time bike commuter) Scott Herhold publishes his thoughts. 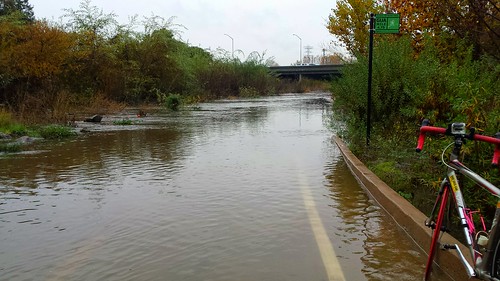 I now publish Santa Clara County trail flooding conditions for the Guadalupe River Trail, San Tomas Aquino Trail, Coyote Creek Trail, and the Adobe Creek crossing under Highway 101 to Baylands. On a day like today, I think most of us know to expect flooding on most creekside trails, especially as you get close to the Bay, but I hope this resource can be useful for days like tomorrow after the rain stops and water levels decline.

The flood information is based on stream flow meters and rainfall. For the lower Guadalupe River north of the airport and Coyote Creek by Milpitas, the data is pretty reliable because the river gauges are located next to the trails where they’re prone to flooding.

For San Tomas Aquino creek, the nearest river gauge is located 10 miles upstream and 500 feet above seal level way up in Saratoga. The trail was covered with two feet of water this morning at the low spots, but my code failed to predict that, so I obviously have some tweaking.

I use USGS water data because it’s easy to use, but the Santa Clara Valley Water District also their own system of stream gauges. They have a gauge on San Tomas Aquino Creek just six miles away from Mission College near Williams Road in San Jose. Unfortunately, I cannot find an easy-to-use way to to access this data short of scraping the web page. If you know of a XML or JSON data feed for SCVWD water data, I’d love to know about it. I suspect I’ll eventually bite the bullet and write a page scraper for this data.

For Adobe Creek, I use the stream gauge on Matadero Creek just south of El Camino Real in Palo Alto. The city of Palo Alto routinely closes this crossing during the winter anyway so I’m not sure how useful that info is, but there you go. 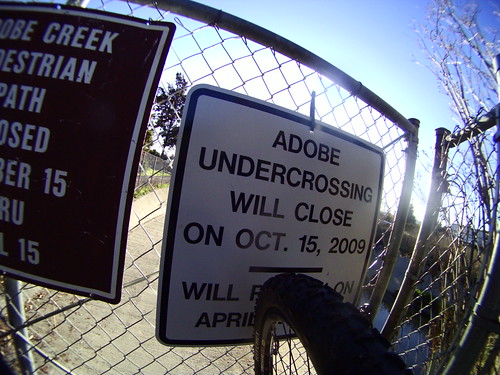 Let me know if you think this trail flooding status is useful. If you’d like to see other creekside trails that are prone to flooding added, please let me know. I’ll need to know a precise location and a history of observations, i.e. you should be able to tell me what days the trail was flooded and when it was dry.