The city of Santa Clara pilot to allow some cyclists access on the San Tomas Aquino Trail to Levi’s Stadium continues this Sunday, November 2 for the San Francisco 49ers game with the St. Louis Rams. 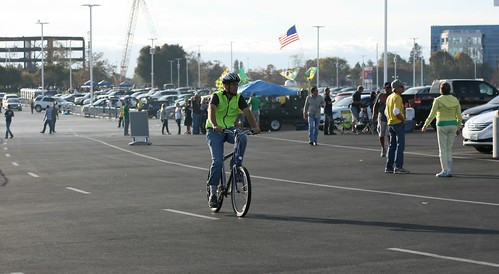 Because of insurance reasons, city policy had been to close the popular path between Tasman Drive and Agnew Road when they also close Tasman Drive during large events. After citizen complains, the city agreed to open the path between Agnew and the Great America parking lot near the stadium Gate C, but only to cyclists, and only to those holding tickets to the game.

Pedestrians are still restricted from the trail, and cyclists without tickets will also not be permitted on the trail between Agnew and Tasman. During the Cal-Oregon game last Friday, at least one enterprising individual used a pedicab to transport ticket-holding pedestrians to the stadium before a security operations supervisor put a stop to it. Bike valet parking is available at the south side of the Great America parking lot, from which game attendees can enter the stadium through Gate C.

Advocates continue to work to open the trail for all users at all times. In the meantime, please don’t hassle the security guy at the trail closure — he’s just doing his job. The appropriate contact are the members of the Santa Clara Stadium Authority, who are also the members of the city council.

In the city of Santa Clara, voters will select their mayor and two city council members on Election Day next Tuesday. Read the candidate survey answers at I Walk I Bike I Vote for the candidate’s views on the trail closure. Incumbent mayor Jamie Matthews remains committed to keeping the trail closed.

The photo above shows a commuter winding his way through the Great America parking lot before last Friday’s Cal vs Oregon game. He told me “I just want to get home!”