Richard MasonerAugust 14, 20143 Comments on Big cars for the big city?

The sale of vehicles classed as “light trucks” — pickup trucks, SUVs, minivans and crossover vehicles — began climbing dramatically in the United States during the 1980s. Light truck market share passed 50% in 2000, with sales of truck-like vehicles remaining the majority of auto sales in spite of a dip during the 2008 recession.

These vehicles take up 25% more space than an average car. Doubling the numbers of these larger vehicles over the past 30 years is equivalent to removing a full lane from an eight lane freeway. 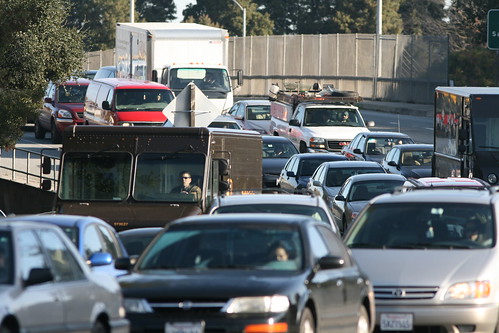 Larger vehicles take up all kinds of space. They need more room in the lane, more parking space, more garage space, and more maneuvering room. But these vehicles sell because we like them.

Like some of you, like me, and like many other young Americans, a younger Danny Kim loved big things with engines. He loved them so much he became an ASE certified Land Rover mechanic. As a side project, he took a pair of Land Rover Defender utility vehicles and stripped them to the frame to rebuild them into his perfect SUV.

While welding beneath the quarter-ton chassis of his perfect truck, Danny was nearly crushed to death when a stand failed and the truck frame fell to the ground. This accident led Danny to reflect on why he needed to build such a large vehicle when most people drive alone.

His solution: cut the car in half and balance it to create the perfect city vehicle, the Lit Motors C-1!

This electrically powered, street-legal two wheeled vehicle comes in at under 10 feet long and 40 inches wide. It can carry two people and a small amount of cargo. You get a full charge within about six hours from a standard wall outlet.

But will it sell?

This might look like an enclosed electric motorcycle. This helps mitigate the problem of space, but to many people, “two wheels” sounds a lot like “danger.” Consumers are often motivated to buy larger vehicles because of their perceived safety benefits.

Kim wanted to solve the space problem, but his solution doesn’t help if nobody buys the smaller vehicle. Kim specifically designed the C-1 to address safety concerns in the larger automotive market. The C-1 is designed with a steel unibody chassis with reinforced doors, seat belts, and multiple airbags.

The really amazing feature of the C-1, however, is its gyroscopic stability system. This is the feature that allows a driver who knows nothing about countersteer and lean to control the C-1. Not only that, this gyroscope keeps the C-1 upright even when it’s slammed by a space-hogging truck. How cool is that?

The C-1 is not available for sale just yet, but late last year Lit Motors announced another cool project — the Kubo Electric Cargo Scooter. 45 MPH top speed, 50 mile range, onboard charger, to be available Real Soon Now for about $6,000 plus shipping.

This post was written as part of the Progressive Apron Project, helping tell the story of people and their initiatives making progress towards a greater good. I have been compensated as a contributor to this project, but the thoughts and opinions in this post are my own.