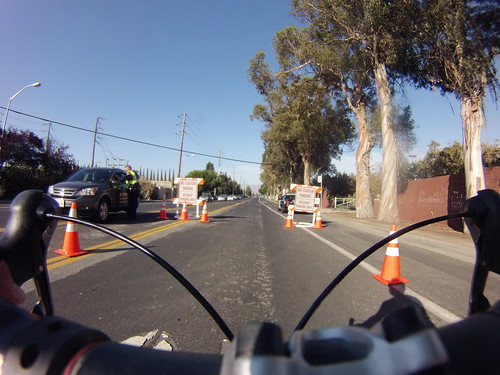 Based on my experience biking to Levi’s Stadium last weekend and numerous comments received from others who did the same, I wrote the below letter to the Santa Clara Stadium Authority and the Santa Clara Bicycle Advisory Committee.

Update: I’ve already heard back from both the Mayor’s office and from BAC chair Teresa O’Neill, both of whom say they plan to bring the issues I’ve raised to the attention of stadium management.

I biked to the Earthquakes game last Saturday, talked to others who biked to the stadium and sought comments online. I would like to bring bike parking issues to your  attention in the hopes they will be addressed by the Santa Clara Bike Advisory Committee, the Stadium Authority, and the Stadium Transportation Operations Group.
1. Trail closure: I was aware of the San Tomas Aquino Trail closure policy months ago, but apparently word did not get out to much of the population. I heard from several people who were completely surprised when they couldn’t bike to the stadium via the trail.
2. Trail detour: Several people who biked to Levi’s Stadium told me the security personnel stationed at the San Tomas Aquino Trail closure on Agnew had no idea which way to direct cyclists to the detour via Lakeshore and the Amtrak parking lot.
3. Incorrect information on the website: The Levi’s Stadium website says “complimentary bicycle valet service is located in Red Lot 1 and Red Lot 6.” As far as I or anybody I talked to could figure out, no bike parking was available at either Red Lot 1 or 6. There was bike parking inside the stadium security perimeter on the east side of the stadium by gates E and F.
4. Knowledgeable personnel: The ushers and security personnel were all very polite, but not a single person knew anything at all about the location of bicycle parking and bike routes back to local trails.
5. Insufficient bike parking: Several people said there were many more bikes than available parking could accommodate. The transportation plan approved by the Santa Clara Stadium authority says a Transportation Operations Group would provide bike parking for up to 750 bikes at events with more than 25,000 attendees. This clearly was not the case on Saturday.
I believe the action items are obvious: personnel directing traffic should be trained on the bike detours and routes to local trails, ushers should know where to direct people to bike parking, the website needs to be corrected to point people to the correct location for bike parking, and bike parking probably should be added.
I realize car parking and public transit has a much higher profile, but these simple fixes can improve access for all patrons at Levi’s Stadium.
Best regards,
Richard Masoner
Publisher: http://www.cyclelicio.us/

I clearly need to update the information on my own Levi’s Stadium bike directions page.