Remember: San Jose Bike Train rolls 8 AM from San Jose Diridon Station. We ride from Diridon to the Guadalupe River Trail for destinations in the north part of San Jose and Santa Clara.

San Jose DOT has updated their report and proposal for sidewalk cycling rules in downtown San Jose for presentation at the city Environment and Transportation Committee meeting next Monday, October 6, 2014. 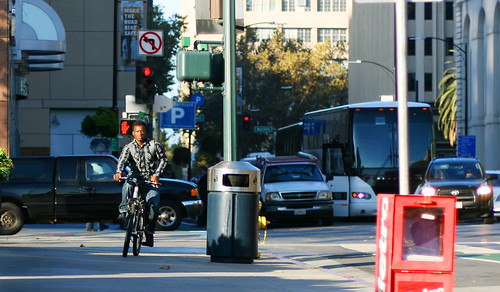 SJ DOT will report on the state of sidewalk cycling around downtown San Jose and ask the committee for their input on the interest in a potential ordinance banning sidewalk bicycling in Downtown San Jose.

District 3 council member Sam Liccardo, who represents the downtown area, first proposed a downtown cycling ban in the spring of 2013 after the Senior Citizens Commission expressed concerns about reckless behavior by some cyclists on the sidewalk. In response, the city defined a Pedestrian Priority Zone for the downtown core, and installed widely ignored signs instructing people to walk their bikes when on the sidewalk. The city also developed a public education campaign and recently installed bike safety banners throughout downtown. 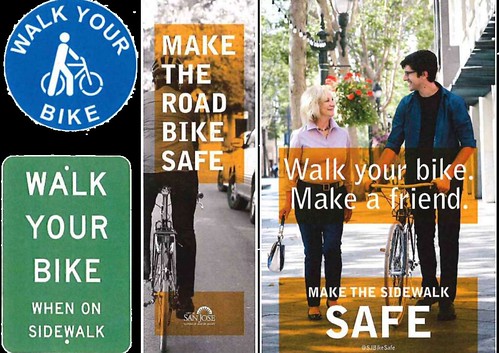 City staff also surveyed bicycle riding behavior before and after the signs, sharrows and enhanced bike lanes were installed around downtown. Besides counting those who rode on the sidewalk, surveyors also classified sidewalk riders are “reckless” and “non-reckless.” The percentage of people riding on the sidewalk vs the street dropped somewhat on both Santa Clara Street and San Fernando Street, but the proportion of “reckless” cyclists increased on both streets.

SJDOT staff propose these new regulations for sidewalk cycling to the Environment and Transportation Committee (with my commentary):

The committee meeting takes place next Monday, October 6, 2014 at 1:30 PM in Wing 118/119/120 at San Jose City Hall on East Santa Clara Street at 5th Street. City council members of this committee are Sam Liccardo, Rose Herrera, Xavier Campos, Don Rocha. Members of the public are invited to attend and provide your input on all topics under discussion. After routine items on the agenda, “Downtown Sidewalks Bicycle Riding” is the third item of six staff reports to the committee.