Richard MasonerDecember 15, 201412 Comments on Waze to create a better world for me and you. But mostly for me.

But what happens when the commodity — in this case, road space — is free? 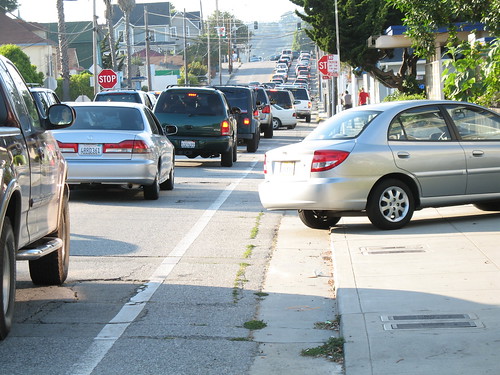 The photo above shows beach traffic in the city of Santa Cruz, California. Nobody wants to sit in this mess for longer than necessary, and the Waze traffic app has become a remarkably popular and effective way to help drivers navigate off of the beaten path through the confusing maze of streets in Santa Cruz to bypass some of this traffic. The app uses crowd-sourced input to determine, in real time, the optimal route from your location to your destination.

The problem: previously unknown neighborhood streets have become byways for through traffic. I first began to see rumblings about this two summers ago at city council meetings, with residents asking if the city can somehow restrict Waze users from their streets. This AP story highlights the problem of daily commuters streaming through formerly quiet residential neighborhoods.

One thing that popped out at me from that story was a quote from Waze Director of Communication Julie Mossler. When asked if if people try to game Waze in attempt to discourage traffic from certain neighborhoods, Mossler said, “People are inherently good.”

Apps like Waze work not because people are “inherently good,” but because we naturally seek our own self-interest. We don’t generally care about the people whose homes we drive past. In the selfishly materialistic fantasy world of Ayn Rand, this informed self interest enabled by Waze supposedly leads to an earthly paradise of utopian perfection, but the objective reality is stress-inducing road noise, disease causing smog, and real physical hazards for the people who live on those streets. People driving through these neighborhoods just want to get through to the other side, so they’re not thinking of children playing in the street (which still happens in Santa Cruz neighborhoods) or folks walking their dogs.

I don’t blame Waze. The problem is more cars than there is space. As Mossler says, “Los Angeles is a powder keg of cars, construction and population that will only continue to get worse. With or without Waze, drivers will be looking for alternatives to major thoroughfares.” Perhaps Waze is a way to help people utilize the existing road network more efficiently, but perhaps it will also create more savvy transportation users who understand that we have other ways to get around.