Richard MasonerDecember 12, 20142 Comments on What’s going on in District 7?

I attended yesterday’s vigil for victims of traffic violence yesterday at San Jose City Hall. Representatives from San Jose DOT, Transform, California Walks and the Silicon Valley Bicycle Coalition came to listen to those who lost loved ones to automobiles. 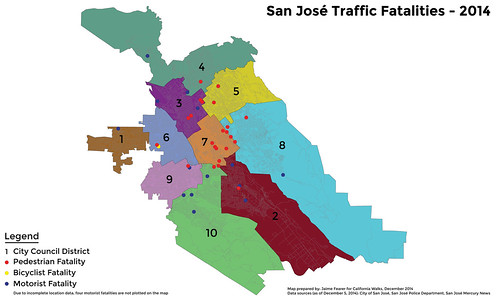 I really dislike biking through D7, so this part of the map really caught my attention: Of the 22 pedestrian fatalities, nine of them happened in City Council District 7. 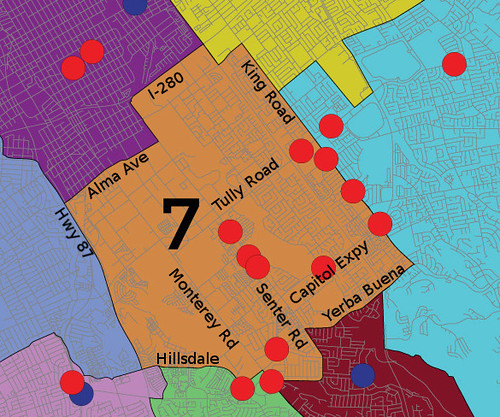 Before the November 2014 election, I Walk I Bike I Vote sent questionnaires to candidates for San Jose mayor and city council. The District 7 candidates distinguished themselves by being the only people who failed to respond. The election winner, Tam Nguyen, is an attorney who’s known for stirring the pot, but doesn’t seem too interested in traffic safety.

The incumbent, Madison Nguyen, has talked previously about walks around her isolated neighborhood at Communication Hill. In discussions about improving the transportation network, however, she clearly puts an emphasis on car mobility over the safety of her constituents, by addressing issues like “traffic congestion” and “roadway improvements.”

You’d hope those representing the district where 40% of pedestrian deaths happen would pay a little more attention to things like traffic safety.

District 7, you deserve better. Demand action from your city council member to get that deadly traffic under control.