For the 30% of voters who will vote on Election Day tomorrow versus the rest of us who mailed our ballots in, here are some candidate issue guides and endorsements available from around the state of California. I focus mostly on local races and issues and mostly on Northern California in this this guide. 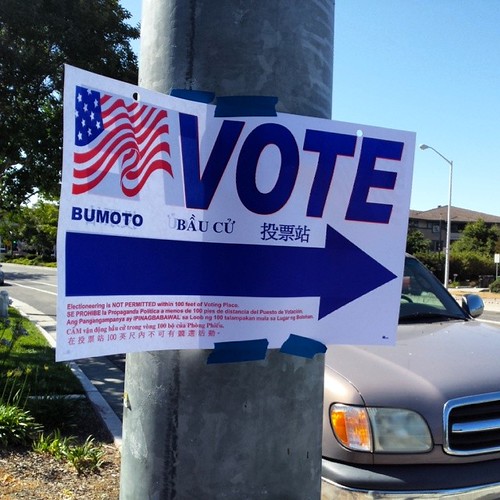 All links open up in a second tab or window.

Finally, the independent I Walk I Bike I Vote Project has published their endorsements for the South Bay cities of San Jose, Santa Clara, Mountain View, and Palo Alto.

The only major departure I have from the South Bay endorsements is for the city of San Jose mayoral race between Dave Cortese and Sam Liccardo.

Several South Bay bicycling advocates have dismissed Liccardo as the Antichrist because of his proposals to ban sidewalk cycling in the downtown area. I believe this proposed ban is misinformed and overreaching, but overall Liccardo has a fundamentally urbanist philosophy, while Cortese has a suburban outlook that continues to prioritize driving and sprawling development while shoe-horning bicycle facilities in ways that still preserves automotive level of service. Cortese’s supporters include the California Building Industry Association, which famously files lawsuits against density and air quality regulations.

For long-term strategic impact, Liccardo is by far the better choice. Beyond the local influence he currently has, Liccardo clearly has his eyes on continued influence at the state and perhaps even national level.

I suspect most voters will probably vote on the larger issues for the mayor’s race in the Bay Area’s largest city. Liccardo has the support of the business community and supports dense development that he hopes will improve the city’s tax base, while Cortese has substantial financial backing from local unions and especially from the Police Officers Association. Liccardo has also drawn the ire of a big portion of the local bike hippie contingent for his attempts to regulate medicinal marijuana dispensaries in the downtown area he represents.

For San Jose Council District 3, frankly both candidates (Gagliardi and Peralez) are excellent from a bicycling perspective, although Gagliardi has a more urbanist background. If it helps you to choose, Gagliardi is the business ally of Liccardo, while Peralez is the union choice with Cortese.

For District 1 (currently occupied by Pete Constant), I favor neither candidate, although I suppose Paul Fong is slightly better. Finally, for D7, I don’t have a feel for either candiate.

For Sacramento, the Friends of the Sacramento River Parkway publish their endorsements for city council and state government.

Ted at Biking In LA tells us who he’ll vote for.