Richard MasonerJuly 23, 20157 Comments on A decade of Cyclelicious

As you can see from my screenshot of this site from November of that year, my web design skills have advanced approximately nil over that time span. That embarrasses me, too.

The blog name was inspired by the old bookmarking service formerly known as del.icio.us. I defined cyclelicious as “Wondericiously full of bicycles. Example: ‘Hmmm, this website is yummy and cyclelicious.’”

Prior to starting Cyclelicious, I maintained an online resource for cycling in and around Boulder County, Colorado, where I lived at the time. Early blogs I interacted with at the time included Jonathan Maus’s Just Riding Along in Portland, Tim Jackson’s Masi Guy in San Diego, CycleDog by Ed Wagner in Tulsa, Blue Collar MTB by Tim Grahl out of Lynchburg, and The Fat Cyclist when it was hosted at MSN Spaces and Elden lived in the Seattle area.

All of these bloggers have since become friends and, with the exception of Ed, I’ve met them in real life at various bike events.

Before blogs, there has always been a discourse in cycling and cyclist advocacy both on and off of the Internet. One thing that seemed to dominate these advocacy discussions and projects annoyned me, and this was an overwhelming emphasis on the risks and dangers of cycling in any “promotional” material and event.

You Will Not Die 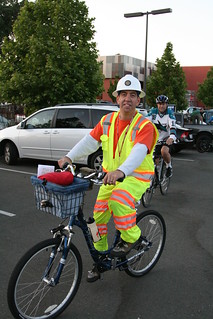 This fear-based advocacy convinces many people, including cyclists, that cycling has a level of danger and a requirement for preparation exceeding most of everyday life. When I began Cyclelicious ten years ago, many bike advocacy groups told us that every trip on two wheels requires advanced mapping, pre-rides, suiting up, carbo-loading, hydration, armor plating, a doctor’s note, next-of-kin notification, and a healthy dose of fear.

Partly in response to this, and partly because I’m resentful of the “strong and fearless” label people apply to me, I crafted my mission statement to counter this paranoid school of thought: “Cyclelicious encourages cyclists to promote bicycling as a fun, safe, responsible, reasonable, and healthy means of transportation.”

Can cycling be safer? Of course, and that is why I support initiatives like Vision Zero which, ideally, puts the onus on safety where it belongs. Over the past decade, I’ve also abandoned my earlier reflexive opposition to bike-specific facilities. My road commutes have always been relatively safe, but my current bike commute takes place almost entirely on a grade separated path and there is no comparison in the stress and comfort level.

I also recommend cycling education and encourage you to ride safely: learn to position yourself for safety, follow the rules of the road, use lights at night, and ride at a safe speed for conditions. Wear ablative armor if your riding style and speed warrants. There are risks when cycling in an urban environment, but you can learn to control the risk to a greater degree than many people seem to realize. 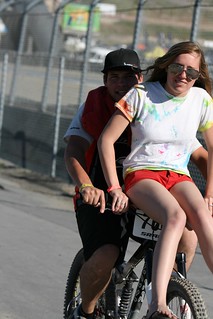 Riding like a moron amplifies your risks of riding in traffic several-fold, but even this isn’t enough to kill off the gutter ninja salmons. Cycling, even when done in a way to maximize Darwinian selection, simply isn’t as dangerous as many people, informed by “common sense” and “intuition,” seem to think it is. Riding on the handlebars may not be the wisest thing in the world, but you know Heidi and Jeff pictured here likely survived this trip.

Has the needle moved?

I have no idea how much I’m responsible for a change in attitudes regarding bike promotion, and how much is just me riding a larger trend, but current bike advocacy seems much more focused on promoting cycling as fun, beneficial, and available for anyone regardless of fitness level and body shape. Safety efforts target the built environment and those who actually cause danger.

I really really appreciate your support, encouragement and education over the past decade. I have my mission, but I have also learned a lot from those who comment here, the various other social media outlets I frequent, and in real life both on bike and off.

Here’s to another decade of embarrassments!

P.S. For funsies and a little more history, see how many of my initial top 10 bike blogs list still exist.