The Parks & Rec Department for the City of San Jose will perform their annual trail count throughout the city’s trail network on Wednesday, September 23, 2015. 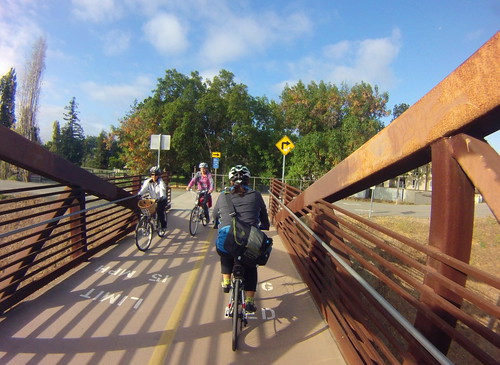 The trail count collects valuable data to support improved planning, design and grant-­writing efforts. It also provides strong evidence of the value of trails as part of the city’s balanced transportation system, showing a large numbers of people commute to and from employment on a daily basis using city paths.

Trail Count was initiated in 2007 primarily as a possible advocacy tool to reduce the number of special event closures along the Downtown trails. There was usage data to share with decision-­makers on the impact and detrimental impact of frequent spring and summer closures in Discovery Meadow as well as large-­scale and prolonged construction projects (Highway 87 repairs) that required long-­term trail closures.

Data from Trail Count 2007 supported development of a formal Trail Closure Policy to minimize the number and duration of closures. When closures were not avoidable, the policy guided the posting of early notification at the trail and on the City’s website, as well as detour signage consistent with a roadway closure.

Data gathered from Trail Count makes the City more competitive for limited grant funding. Over $700,000 in new grant funding was secured from grants during Fiscal 2013-­14. A coalition of ABAG, Bay Area Ridge Trail and the Coastal Conservancy teamed with San José for a North San José Climate Change grant $60,000) because the City had long-­‐term and significant data on trail usage tied to transportation. 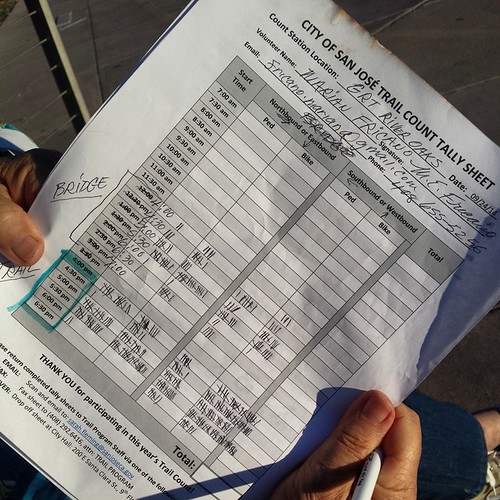 September is selected for trail count day because school is in session, weather is mild with rain unlikely and daylight hours extend past 6:00 PM. Additionally, a number of grant applications are due late in the year making data timely, and the month is recommended by the National Pedestrian and Bicycle Documentation project which seeks to standardize and increase the number of pedestrian and bicycle counts occurring across the country.

To celebrate trail count day and (perhaps artificially inflate the numbers a little?), we’ll have a special Bike Train ride Wednesday morning, starting at the usual 8 AM start time at Diridon and the stop at Bel Bacio Cafe in Little Italy shortly thereafter. We’ll ride the Guadalupe River Trail and pass the Coleman and River Oaks counting stations. I’ll try to bring gifts for the wonderful volunteers who make this trail count possible.