Last August, the Federal District of Mexico amended their traffic code with an addition allowing lane-splitting when traffic is congested.

California cyclists currently wheelsuck on the privilege motorcycle riders have to split the lane. California AB-51, which would regulate motorcycle lane-splitting, has the potential to make this common practice unlawful for bicyclists. The motorcycle lobby has been fighting this bill, where it currently languishes in committee. AB-51 has strong support from the CHP, the California Office of Traffic Safety (OTS), and the insurance industry, however, and the bill author has amended to the bill to address motorcycle group objections. I’ve mentioned this to both CABO and the CBC asking them to provide their input, but there seems to be little concern that AB-51 would have any impact on bicyclists. Among CABO members (which is the statewide organization that promotes vehicular cycling), there’s been debate on the merits of lane splitting — those who live and bike in heavily urbanized areas generally support the practice, while others believe cyclists should queue up behind a mile of stopped traffic with everybody else because of an obsessively inflexible application of the “same roads, same rights, same rules” mantra. 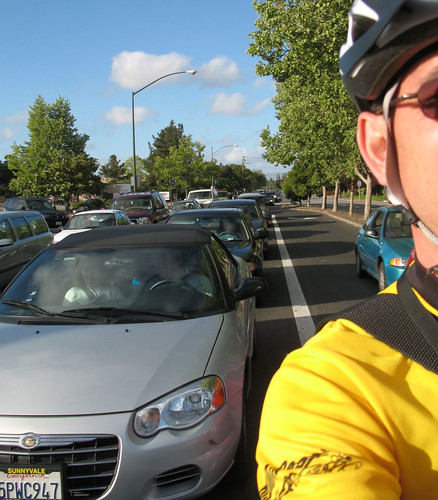 The sausage making process behind AB-51 is interesting in itself and may be instructive in the context of active transportation safety. I might write more on this later, but briefly: CHP and OTS published lane splitting safety guidelines in 2013. The California Office of Administrative Law complained that these could be considered a form of “underground rulemaking” and advised both agencies to remove these lane splitting best practices from their websites. State and local public agencies, however, have never been constrained from publishing pedestrian safety guidelines that nag about “distracted walking” and publishing the long-discredited 85% number in their adult helmet promotion flyers.