On Monday I briefly mentioned the self-charging electronic bicycle pedal on display at CES 2015 in Las Vegas. This is the “smart pedal” that collects trip data and uploads that information to the web independently of any other connected device. I asked Connected Cycle for additional details and they filled in the blanks. Some of this was inferred by the press release, but I asked to make sure because I’ve seen sketchy information from other vendors when it comes to claims about location and Internet access.

As I noted before, I see possible value for fleet management applications and theft tracking. Connected Cycle says they’ll have a special key to help prevent pedal removal by potential thieves.

Late last year, Swedish helmet designer POC and Swedish automaker Volvo announced their wearable safety tech that uploads the cyclist’s position to the “Volvo Cloud,” so the driver can be warned of presence of bicycle traffic ahead. Because Volvo vehicles are already tracked, the cyclist can also be warned of the approaching car.

The proof-of-concept was demonstrated at the Ericsson booth at CES this week. The electronically equipped POC helmet uploads the cyclist’s position to the Internet via a connected phone. The helmet also warns the cyclist of approaching traffic with flashing LEDs and vibrations because, golly, I hardly ever expect to see cars when I’m riding. Below is a very typical view of traffic as shot from the back of my bike. 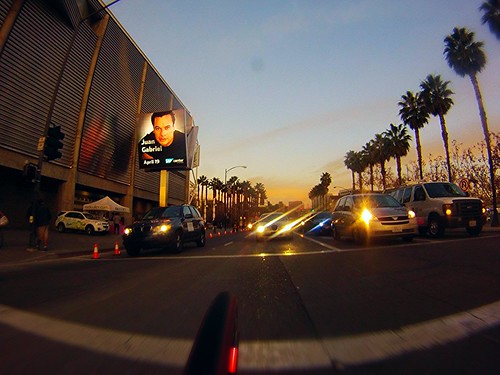 According to Bike Radar, Volvo, Ericsson and POC anticipate product launch within about two years.

Volvo says they plan to open source their system once they develop it. It occurs to me that mobile devices today already have the requisite hardware to upload the cyclist’s position data to Volvo. In the United States, GM and Ford have similar networked systems for their brands of automobiles.

The best overview of this system is perhaps by James Huang at Bike Radar: POC, Volvo and Ericsson introduce groundbreaking cyclist safety concept.

Yet Another LED Bicycle Jacket

The tech media were excited about the Visijax Commuter Jacket, which received a CES show innovation award. This jacket has the features I expect to see in cycling jackets in the $140 price range — breathable waterproof plus taped seams, ventilated, etc — plus it has high intensity LEDs, including built in turn signals on the sleeves that activate when you lift your arms. Unlike many similar turn signal gizmos, this one doesn’t assume exclusive use of a single arm for signalling.