I am a risk averse ninny, and I ride a bike. 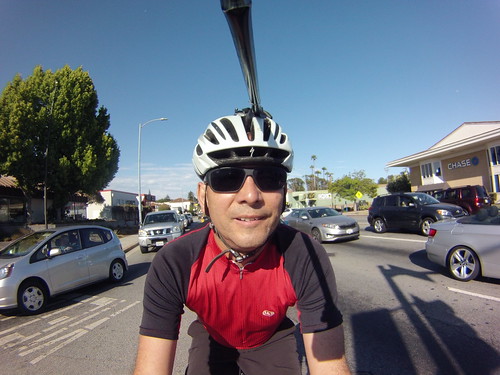 When I began Cyclelicious ten years ago, many bike advocacy groups told us that every trip on two wheels requires advanced mapping, pre-rides, suiting up, carbo-loading, hydration, armor plating, a doctor’s note, next-of-kin notification, and a healthy dose of fear. Partly in response to this, and partly because I’m resentful of the “strong and fearless” label people apply to me, I crafted my mission statement to counter this paranoid school of thought: “Cyclelicious encourages cyclists to promote bicycling as a fun, safe, responsible, reasonable, and healthy means of transportation.”

Since then, I’ve learned that messaging is a difficult thing, and some are more skilled than others at communicating the nuances of bicycle safety. There are certainly actions all of us can take to reduce risk, and I encourage you to ride safely. While riding like a moron amplifies your risks of riding in traffic several-fold, even this isn’t enough to kill off the gutter ninja salmons. Cycling, even when done in a way to maximize Darwinian selection, simply isn’t as dangerous as many people, informed by “common sense” and “intuition,” seem to think it is.

Yet many people, including cyclists, strongly believe cycling has a level of danger exceeding most of everyday life. Bike East Bay, the cycling advocacy group for Alameda and Contra Costa Counties in California, asked their members and other people to take this survey regarding opinions on Carol Liu’s proposed law that mandates helmets and reflective apparel for adults who ride bicycles. The final question on the survey asks respondents what type of cyclist they are: Strong and fearless, enthused and confident, interested but concerned, or no way no how.

I’m sure you’ve heard from concerned friends and families that you’re crazy or stupid for riding with traffic. It’s especially frustrating to see this in comments from other cyclists regarding this survey question:

Editorials by non-cyclists frequently opine that mandatory helmet use is a “no-brainer.” The San Jose Mercury News goes so far as to claim cyclists who oppose a helmet mandate are in denial about the risks of cycling in Tuesday’s editorial.

Cycling advocates do not deny the risks of cycling, and we spend a lot of time communicating how to mitigate those risks. Our arguments that the risks are roughly equal to driving, unfortunately, have fallen on deaf ears so far. Why is this?

For the most part, we don’t “estimate” familiar risks at all; they’re too familiar to bother thinking about. Most of us get into our cars without ever considering whether driving is a significant risk. If we did pause to estimate the risk of driving, we might or might not recognize that it is sizable. But familiarity closes our minds to the very question.

Familiarity closes our minds to the very question. In other words, most of us who drive, including the editorial staff of the Mercury-News, are in denial about the true risks out there.

People view cycling as dangerous because they’re unfamiliar with it. Wearing a helmet seems like a “no brainer” because it’s the only risk mitigation they’ve heard about, even though long time cyclists understand it’s probably about number ten on the list of common risk control mitigations.

Please don’t get me wrong: there are risks in cycling, just as their are risks in walking, driving, bathing, or shopping. We can take steps to reduce those risks. As a society, responsibility should belong to those creating the hazard, even as individuals take the necessary steps to mitigate those existing hazards. The poor kid who got thumped by a gravel truck in Cupertino last October wore a helmet, but he still perished from his significant head trauma. It would have been much better if the gravel truck didn’t hit him in the first place.

What do you think? Is cycling dangerous? Should we really encourage people to risk their lives by moving in the public realm outside of the safety of a metal cage? Or is cycling a fun, safe, responsible, reasonable, and healthy means of transportation?

By the way, I recommend a further read of Managing Risk Familiarity by Peter Sandman when you have a chance. Sandman focuses on crisis management (i.e. the responses corporations should take after a public relations disaster), but there’s a lot applicable to the task of bicycle advocacy in his essay.

Watch for Part II on Thursday: “I’m not dead yet.”