Richard MasonerApril 17, 20153 Comments on Give Me Three at the Sea Otter Classic 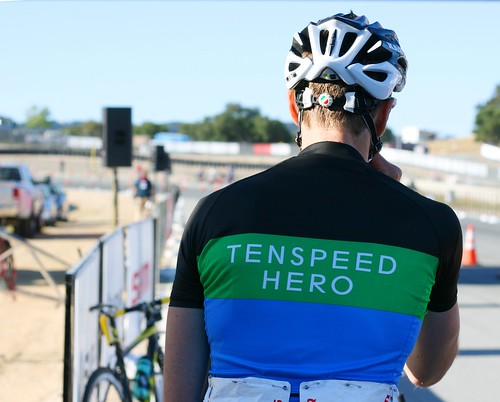 I also love to rant about the mountain bikers driving their bikes up the road who fail to give roadies like me any room as they whiz pass. The environment this year, however, was radically different. Can we credit California’s new Three Feet for Safety law?

The main entry to the Sea Otter venue, South Boundary Road, is a narrow two lane with a 45 MPH speed limit, no shoulders, and an 8% grade. In spite of excellent sightlines, bros in full-sized pickup trucks often buzz closely past those of us on drop-bar bikes struggling up the hill at under 10 MPH. Shouts of “GET OFF THE ROAD” aren’t unusual.

When I biked up South Boundary for the first day of Sea Otter early yesterday morning, I shared the road with dozens of vendors driving their box trucks and Ford Transit vans up the hill. With only three exceptions, every one of these vendors and private vehicles moved over to pass, with a good percentage changing lanes completely. If they had to slow for oncoming traffic, they did so. Nobody honked, nobody yelled, nobody threw things.

Does the new three foot law explain the difference? I can’t think of any other reason why the driving behavior is so radically different from one year to the next.

Who were the three excpetions? Perhaps ironically, the first and the worst was an American Medical Response Monterey County ambulance, which passed with inches to spare. At least this driver slowed down substantially when he passed, but still.

The second was Troy Lee Designs, which passed within about a foot with a monstrous truck at something like 20 miles over the speed limit. They’re officially on my butthole list.

The third — and I’ll note the irony again — was an older, 12 passenger van fitted for handicap use with logos that seemed to represent a group supporting disabled athletes. I don’t remember the name but that’s the impression I had.

Like I said, these three were the very notable exceptions. Overall, the uphill riding experience was much more pleasant that I’ve experienced in the past. Kudos to the intelligent and ethical majority who choose to drive safely. Jeers to the morons I mentioned above.

I’m at Sea Otter again Friday and Saturday. You can follow me through the day on Twitter, Instagram, and on Google Plus. If you’re at Laguna Seca, please feel free to give a shout out at any of these resources. You can also find captioned photos as I upload them at Flickr.com/bike.