The Arroyo Seco Parkway — widely acknowledged as the first freeway in America — opened 75 years ago today between Pasadena and Los Angeles, California. 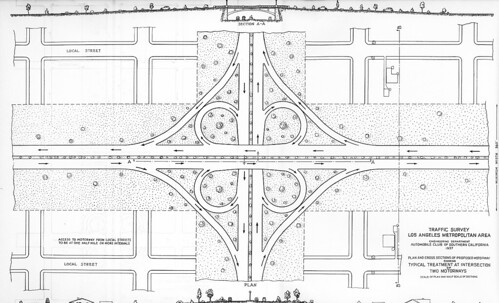 In the 1930s, the city of Los Angeles struggled to keep up with ever increasing automotive traffic with more and wider roads that became obsolete as soon as construction was completed. Local traffic engineers and the Automobile Club of Southern California built on earlier “parkway” designs to develop the concept of what they called the motorway: full grade-separation at intersections with on-ramps and off-ramps, limited access to adjacent properties, physical barrier in the median, and no impediments to traffic from those pesky people on foot, on bike, in a trolley, on horseback or in a buggy. 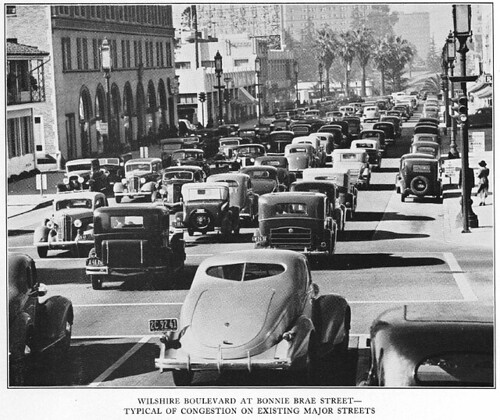 The Arroyo Seco River between Pasadena and Los Angeles became an early favorite for this proposed motorway. The right-of-way mostly existed already along the route of the old California Cycleway. Highway backers apparently used this “parkway” designation in an early example of greenwashing to placate the fears of Pasadena residents and businesses, who feared the proposed motorway would divide their community with an impassable river of high speed automotive traffic. Highway promoters promised landscaping with park-like features and a human scale for visions of a relaxing Sunday drive, while engineering from the very beginning excluded most of those features in favor of speedway elements to maximize automotive throughput and speed.

In spite of opposition from South Pasadena, the state selected the Arroyo Seco route. The new Arroyo Seco Parkway opened on July 20, 1940 at a cost of $5.75 million.

One aspect of motorway design that didn’t survive practical reality was a concept called the “motorway building,” as diagrammed below. 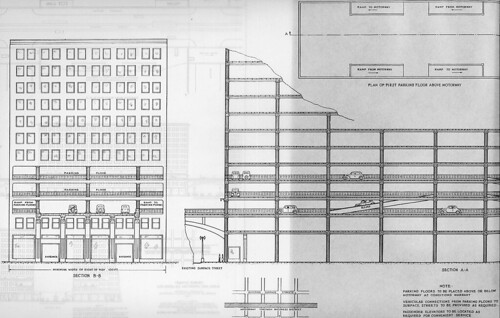 The first two levels are reserved for commercial use, while the elevated freeway runs through the third level of this building. “As many floors as required” are reserved above this third level for parking, while office space takes up the rest of the building.