The 9-mile route from the Almaden Valley to the northern part of San Jose has the most stop-and-go traffic in Santa Clara County during commute hours, according to the Valley Transportation Authority. Traffic on about 78 percent of the six-lane freeway creeps along below 35 mph during morning and afternoon rush-hour periods, 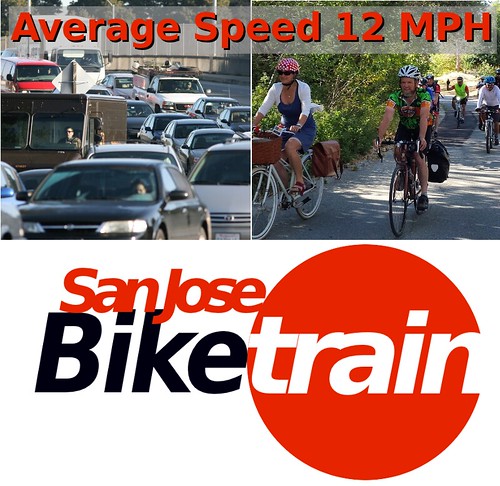 You can bike or take public transportation to our start location at San Jose Diridon Station. You can also drive part way, park in the free VTA park-and-ride lot next to Highway 87 at either Tamien Station or the Curtner Park-And-Ride (though I need RSVP by tonight if you’d like a guide to lead the way to downtown San Jose). Free, 72-hour parking is also available next to the Bike Train route off of the Coleman Avenue exit from Highway 87.

Not only does active transportation help you, it helps other commuters by reducing traffic congestion. See what VTA has to say:

Studies have shown that if a shift as low as 8 percent away from solo commuting could be realized, much of the existing congestion could be relieved. If everyone in Santa Clara County committed to taking transit or telecommuting only two days a month — TWO DAYS A MONTH– we would realize this relief. — VTA spokeswoman Brandi Childress regarding South Bay traffic congestion.

Golly, it so happens that San Jose Bike Train runs TWO DAYS A MONTH. We roll the first and third Wednesday of every month. This is not by accident.

My commute starts in Almaden Valley!

For those of you in Almaden Valley, a Silicon Valley Bike Coalition staffer leads a weekly “bike pool” (think “carpool”) ride from the Sonoma Chicken Coop parking lot at Almaden Expressway and McAbee Road near Almaden Lake at 7:30 AM. Meetup points along the way include:

This route parallels Highway 87 into downtown San Jose utilizing the bike path adjacent to the freeway. Like Bike Train, this is a low key, casual ride. For details on this weekly morning commute, contact ashley@bikesiliconvalley.org.