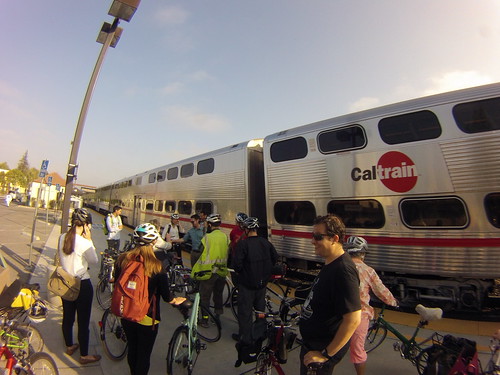 I was an invited panelist, but I go mostly for the networking. This networking began as soon as I arrived at San Jose Diridon Station, where I ran into Jaime “I’m an LCI, I know how to ride a bike” Fearer (Planning Director for California Walks), Melissa “Green Gal” Ott (from the UC Santa Cruz Office of Sustainability), and Brendan “Green Guy” Whose-Last-Name-I-Missed (Santa Cruz Bike Nerd).

Several other attendees rode the northbound Caltrain 227. Caltrain is already at capacity, so mid-week special events can kind of jam things up more than they already are on the train. Here’s my helmet cam view as I squeeze down the aisle past other summit participants to retrieve my bike at California Avenue. Yay!

Candice Stein led several people on a “bike pool” ride from Cal Ave to the event venue. When long-time bike advocates, bicycle safety instructors, public health workers, and professional planners ride together, you see something you don’t often see on group rides: 20 people all coming to a complete stop behind the stop bar at stop signs and red lights.

Nuria Fernandez is a riot 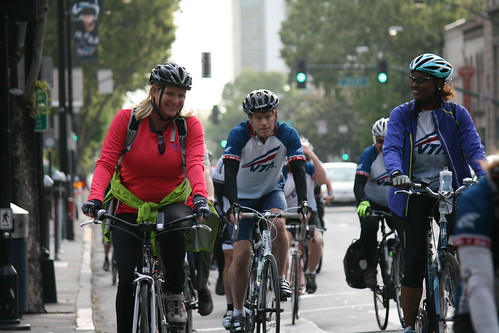 Because VTA is the Congestion Management Agency for Santa Clara County as well as the transit operator, it has much larger role than SamTrans, which is responsible only for transit on the Peninsula. SamTrans GM Jim Hartnett talked about the role of SamTrans and Caltrain (which his agency manages) as an agency that “promotes mobility” in general.

I realize this view is not universal, but in the Bay Area, bicycling and public transportation are considered complementary by many advocates. The bus and rail systems are good to get you long distances, with bicycles providing that last mile connection to and from your destination. My video above of Caltrain shows the extreme popularity of bikes on transit here; what other transit agency on the planet transports nearly 7,000 cyclists with their bikes every single weekday, in addition to the 60,000 other passengers they carry?

This came about because cyclists pack the room at Caltrain board meetings, especially when bike accommodations are on the agenda. Hartnett describes cyclists as “passionate, articulate, persistent and informed.” We know what we talk about at these meetings, and we bug the snot out of SamTrans staffers and board members. 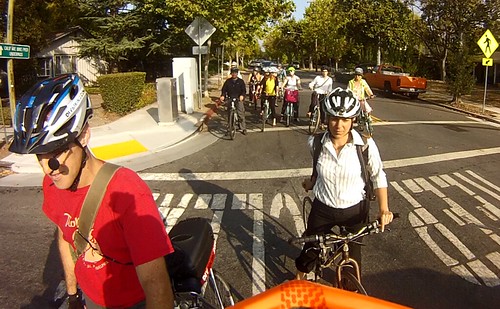 VTA does transportation planning in the South Bay in addition to its role as a public transportation agency. VT GM Nuria Fernandez literally walks the walk on active transportation – she lives just off of the trail I use for my daily commute, and I see her walking to work at VTA. I don’t know how much transportation cycling she does, but Ms Fernandez does ride recreationally which has as much value in my book.

Fernandez lights up any room she entered, and she earned herself some accidental brownie points after mistakenly referring to the “seven foot” bicycle passing law in California (before quickly correcting herself).

The public health departments from both San Mateo and Santa Clara Counties presented information about bike and pedestrian collisions, with statistics about location, ethnicity and a few other factors. Did you know 32% of bike and pedestrian fatalities in San Mateo County, for example, are African-Americans, although they only make up 3% of the population?

Both counties have staff who very clearly understand the connection between land use and transportation, and how transportation can impact public health in various ways. San Mateo Public Health, for example, routinely sends letters in support of road diets, and supports the efforts to add bike lanes to El Camino Real through a portion of Menlo Park.

I don’t have the figures on hand at the moment, but another interesting factoid: something like 40% of bike fatalities on the Peninsula are wrong-way cyclists. Don’t be a salmon, m’kay?

My only slight gripe is the lack of exposure data. Are there more collisions along El Camino Real because there are more people biking there? I suspect the answer is “yes” but we really don’t know for sure. Still, the absolute numbers inform us where the trouble spots are and tell us where to pay more attention to bike safety. 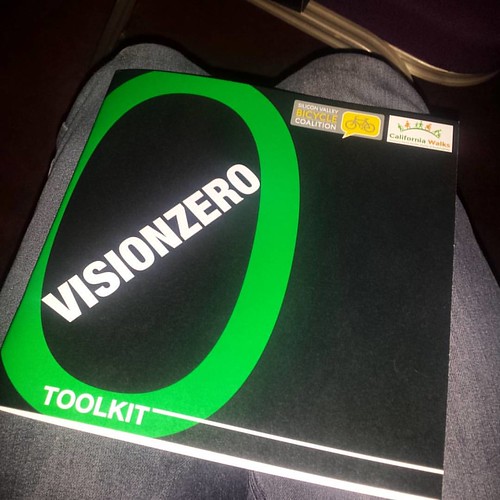 The Vision Zero Toolkit developed by SVBC and California Walks was the star of the bike summit. This toolkit provides an overview of the steps you need to successfully implement a Vision Zero policy in your locale.

The biggest question from the audience seemed to center on “Okay, you have a Vision Zero Policy. So what? How do you make it happen? How do you get your local government to implement this policy?” This question is super relevant given the city of San Jose’s reluctance to endorse the Lincoln Avenue Road Diet in Willow Glen after adoption of this policy.

For the answer, go back up to up SamTrans GM Hartnett’s comment about “passionate and persistent” bike advocates above. SamTrans knows who we are and what we want. We pack the room at Caltrain board meetings.

One of the Vision Zero Toolkit authors, Jaime Fearer of California Walks, answered, “Imagine you’re an elected official who knows road diets are beneficial to the community, and you’re in a room with 200 hostile people telling you to put the car lanes back. If you want road diets and bike facilities, you need to let the officials know you support them.”

The Lincoln Avenue Road Diet may come up for City Council discussion in September or October. If you want to see the bike lanes stay, please show up for the council meeting.

One of these things is not like the other

This is a bike safety thing, but a newer event sponsor that happens to be technology company asked for a technology panel discussion. I joined Lauren Ledbetter (bike program manager for VTA), Andrew Casteel (who created the Team Bike Challenge website) and Frank Hebbert (Director of Digital Product Management for Motivate, which does Bay Area Bike Share) for a panel on technology and bike promotion.

We mostly talked about how data can be used to improve bike planning, wayfinding and so forth. I touched on the limitations of collecting data from a group that are already over-represented in transportation planning, and unfortunately I still don’t have any good solutions to that problem.

VTA has some interesting things on the way: I’ve been playing with VTA’s multimodal trip planner since last May and love it in spite of the bugs. They want me to remind you that it’s still in beta. Lauren also mentioned that VTA is looking at ways to sense the presence of bikes on their bus bike racks, and making that data available to a bus-arrival app that includes that bike data so a rider with a bike can see if bike space is available on the bus.

I’m not sure how, but we somehow veered away from technology into the strategy of bike advocacy. I think that may have been my fault and I apologize if I came across as a wild-eyed radical. 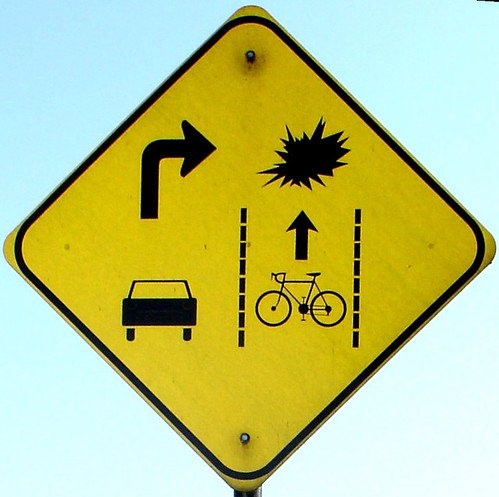 Finally, we split into work groups themed around the “Five Es” of transportation planning. I was assigned to “EDUCATION” along with Ian Emmons, who some of you might know from San Jose Bike Party. We also had a couple of LCIs, a trauma nurse, a youth educator, a mayor, a BPAC member, and assorted others.

Of the six questions on our education worksheet, the first four were about helmet education, with the very first a loaded, “What bad things will happen when you ride without a helmet?” If you know Ian, you can guess how he reacted. I’m ambivalent about helmets but felt waylaid by the nature of the questions. The result: we wasted half of our time addressing the utterly ridiculous “Have you stopped beating your wife yet?” logical fallacy behind these questions instead of talking about measures that actually improve cyclist safety.

Take the wrong-way cyclist fatalities I mentioned above, for example: should I buy one of Stanford’s $10 helmets for a helmet giveaway, or should I educate the cyclist to ride right and avoid the potential for head trauma in the first place?

Mike Norris, a newcomer to the Bay Area, published the best set of takeaways from this summit. He also includes links to the regional bike death statistics and Vision Zero Toolkit.

Green Gal from Santa Cruz also posted her narrative of the 2015 bike summit, highlighting the personal networking at events like this that helps you feel like you’re a part of something larger.

Thank you to the Silicon Valley Bicycle Coalition for this event, which I consider extremely worthwhile to anyone involved in bike advocacy. I won’t call it life-changing, but the networking is essential. Thank you also to Jessica Weare at Microsoft for her support of this event. I’m very impressed with the local involvement in transportation issues from Microsoft and I look forward to seeing what they have for us in the future.

If you missed this Silicon Valley Bike Summit, you have another opportunity to meet bike advocates statewide at the California Bike Summit coming up in San Diego on October 25-28, which should be just in time for epic El Nino rains forecast for this fall.