Richard MasonerJuly 10, 20151 Comment on Paths For Bicycles: Why San Jose Wheelmen Oppose Them 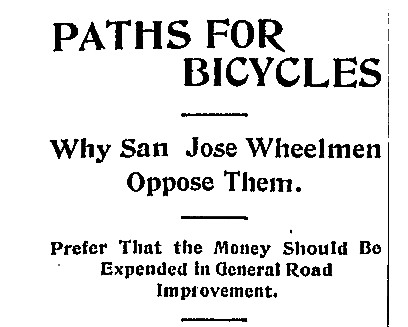 San Mateo County has taken the lead and is introducing a new feature in highway improvement. She has decided to erect a bicycle path by the side of the main road, running from San Francisco to San Jose.

The path … will extend from what is known as Uncle Tom’s Cabin, above the city of San Mateo, to about a mile north of Redwood City. [Note: San Mateo County will eventually pave California’s first highway at El Camino Real in front of Uncle Tom’s Cabin in 1912.]

The path will be six feet in width, and is for the exclusive use of pedestrians and wheelmen. Should the plan prove satisfactory, the path will be extended the entire length of the county.

Not long ago there was an attempt to establish a bicycle path between San Jose and Alameda, but the scheme could not get the necessary backing and consequently fell through. This path was to be fo the use of wheelmen alone, and was to be constructed by popular subscription among the cyclers. It was not thought, however, that the roads between here and Alameda were poor enough to warrant construction of such a path and riders would not respond.

Later it was proposed to make a bicycle path along the Alameda, between [ San Jose ] and Santa Clara, but many of the wheelmen themselves opposed this, saying that they would rather see the money spent in putting the road bed itself in good condition, and that they did not want any special privileges.

“Cycle paths are popular in some parts of the east,” said a local wheelman to a reporter for the Evening News today. “Around Boston and New York they are building a good many, as well as in other centers of population. California has always been among the first to adopt a good thing, and there has been some move here to establish cycle paths, but the general opinion among the wheelmen in this part of the state seems to be that they are not needed. Our roads are so good, and our system of watering keeps them in such fine condition that they are usually preferable to a path.

“The scorcher would rather have a good wide road any time than a narrow path…. The only place that a cycle path would be of any use is where the roads are in such poor condition that they are next to impassable for a wheel. Even under those circumstances I believe most riders would rather see the money expended in perfecting the road itself.”