The Santa Clara Valley Transporation Authority (VTA) kicked off the county bike plan update with a workshop last night asking the public for their vision for bicycling in Santa Clara County. 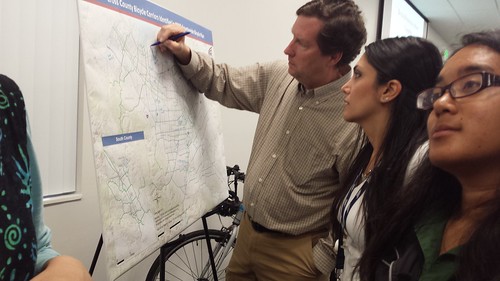 Beyond BPAC members and VTA staffers, the only attendees were the usual gang of actively involved members of the Silicon Valley Bicycle Coalition and SVBC staff.

And then this morning I enjoyed reading tweets from people ripping into how ineffective the bike coalition is. Guess how many of you showed up at this meeting? Or at any meeting over the past year? Or community discussion on bike facilities anywhere in the South Bay? How many of you initiated action to improve bike access around here?

Yeah, I take it pretty personally when you sit back on your lazy backside and expect somebody else to do the heavy lifting. Shut up or put up.

Consider the example of East Side San Jose. This area of San Jose has been neglected for years by the city of San Jose DOT. Some East Siders began speaking up two years ago, and now we have healthy and active advocacy for bicycle transportation and real improvements are taking place.

If you want things to happen, then make it happen. SVBC, myself, Andrew Boone, and others tried for years to shake you out of your complacency about bike planning vs car parking in the Diridon Area Station Plan, so when you gripe this morning a full year after the plan’s approval about the lack of bike parking at Diridon and blame SVBC for inaction, I get a little frustrated.

Santa Clara BPAC and SVBC board members are putting tremendous time, effort and cash into re-opening the San Tomas Aquino Trail on Levi’s Stadium event days. The city of Santa Clara stymies these efforts at every turn, but these activists persist and are becoming a real thorn in the side at the City Manager’s office and Police Chief. Good for you if you signed the change.org petition, but if you really care about this issue you need to show up at the city council and stadium authority meetings and make some noise so it doesn’t seem like a two-man show. Please don’t give the BPAC any crap about this — they’re on your side but the city council refuses to take the input from this citizen advisory committee.

How many of you showed up at any of the Stevens Creek Trail Extension meetings, where trail opposition outnumbered trail supporters three-to-two? People have worked literally for decades to get decent bike access here, but they’re working against entrenched and motivated resistance.

How many of you showed up to tell the city councils in Menlo Park or Mountain View that you want bike lanes on El Camino Real?

Don’t even get me started on those of you who actively opposed secure bike parking at South Bay Caltrain stations in 2008 because it supposedly distracted from the larger issue of more bikes on board the trains.

I wish I had the leadership skills and imagination that many of you complain I don’t have, but I don’t. Those of you who think you have these qualities need to step it up.

Please spare me your excuses. I have a family and a job and church obligations, live in the next county over, and depend on my bike and public transportation to get around, yet I still manage to make it to a few of these meetings each year to give my input. In my county, the most active member of the citizen transit advisory committee is completely blind; she too has a family and a job in Santa Clara County. As far as civic involvement is concerned, she puts everyone else I know, including myself, to shame.

I welcome your ideas, and I can appreciate that members of the local bike coalition don’t brag about successes, or that perhaps my priorities aren’t the same as yours. My time is limited. I’ll be honest and let you know that San Mateo County, for example, is not on my radar at all.

I don’t welcome your attacks. It gets old. So please: Put up or shut up. If you want change in Belmont or Gilroy or San Mateo or Los Gatos or Los Altos, then make it happen.