Richard MasonerDecember 3, 20151 Comment on Revisiting the totem pole of danger

Last year I kind of introduced a totem pole of danger. It’s the crazy idea that those operating the more dangerous devices should take more care.

I’ve redrawn this as a hazard hierarchy. The wider the triangle, the more careful you should be. Apologies for my lack of graphic design skills, but I hope it helps to illustrate the concept. 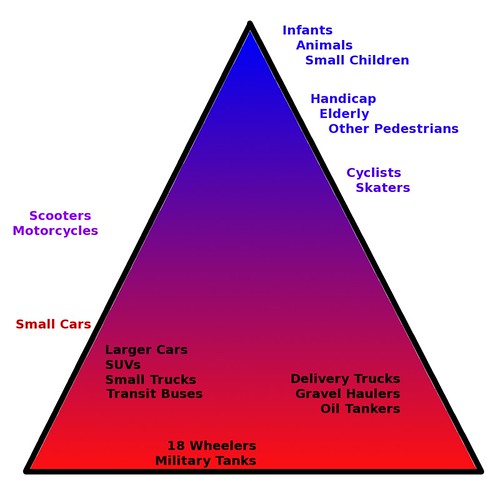 People understand this when it doesn’t apply to themselves. We’re (rightly) outraged when an operator driving his heavily-loaded gravel truck way too fast on a congested mountain road demolishes a conga line so cars, sending a dozen people to the hospital and one to the morgue. The gravel truck driver should have anticipated stopped traffic around the next bend during the morning commute, because this happens Every Single Day. We don’t generally tell the victims that “you may be right, but you’re dead right because you’ll lose a fight against a 20 ton truck,” nor do we chastise innocent county workers at a holiday party who failed to jump out of the way of a .223 round because “the laws of physics outrank man’s laws.”

Yet story after story involving injured and killed cyclists and pedestrians are filled with “safety information” for these most vulnerable users, even when the motorist is acknowledged to be at fault. I understand the in-group psychology, but it’s still bizarre and infuriating to read these things.

I’m happy to see people like Patrick in Pittsburgh responding to stories about the “threat” created by those walking and biking on city streets. In his case, Miner deconstructs the windshield perspective of bus drivers who complain about “jaywalking” pedestrians and “scary” bicyclists creating disorder and havoc.

The story Miner quotes says: “If these perils of the traffic nightmare in Oakland make professional Port Authority bus drivers nervous, imagine what those conditions can do to regular motorists.” Miner then points out “Blazina has it backwards. People driving motor vehicles – having the unique capacity to kill – ought to be nervous. They should be concerned about killing someone if they don’t slow down and pay attention.”

Via Streetsblog.net, where Angie Schmitt provides more commentary on the windshield perspective.