I launched a new season of Ride Every Road with this morning’s modest ride to add portions of St John, St James and Julian Streets in downtown San Jose, California to my cycling coverage map. 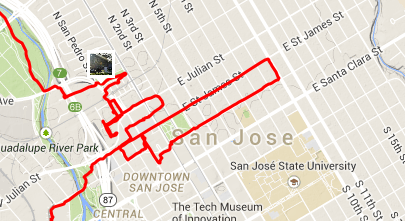 In 2014, Ride of All of SF inspired me to ride every road in the city of Santa Cruz, CA (which I completed) and Santa Clara , CA (which I did not). My ride coverage is tracked on GPS and uploaded to Strava.

After checking my Strava heatmap, I made the quick decision this morning to Ride Every Road in downtown San Jose.

Downtown San Jose is generally the area around the Central Business and Entertainment District within a mile or two of Santa Clara Streets and Market Street. Wikipedia says downtown is the large region bounded roughly by Highway 87 on the west, I-280 to the south, Coyote Creek to the east, and 101 to the north. The Downtown San Jose Business Improvement District covers a much smaller area, setting the boundaries at Julian Street, 4th Street, Highway 87 and I-280, with a flagpole west along Santa Clara Street to include the SAP Center and Diridon Station, and another that includes the Target shopping center along Coleman Ave.

For my downtown effort, I’ve defined this hybrid with about 40 miles of streets. For anybody who would like to join me, the boundaries are Highway 87, I-280, Coyote Creek, Julian Street with a little jog along the Union Pacific railroad tracks. 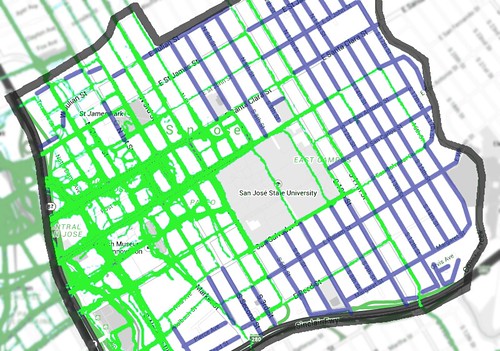 Green on the map shows roads I’ve covered, while blue shows roads yet to ride. I can perhaps knock out those final 20 miles in a single two to three hour effort, so it occurs to me to expand my ambitions. 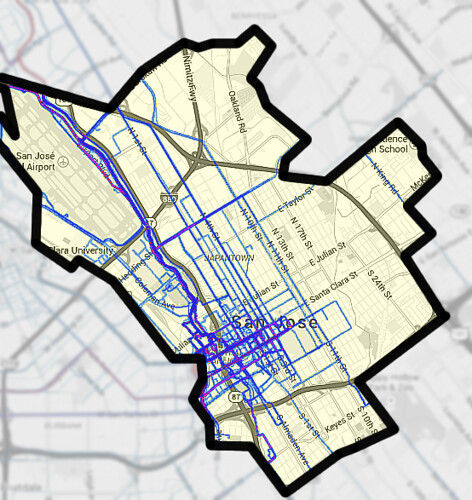 After I complete downtown later this month, I’ll hit Japantown next — again with a single ride — then the bit south of I-280. I’ll circle in tiny bits and pieces of the portion north of Hedding Street during my commutes and perhaps on lunch rides.

I know people riding all 2400 miles of roads in the city of San Jose. 2400 miles may sound a little overwhelming, but by splitting it up into little chunks the effort becomes much more manageable, and you feel a sense of reward when you complete the smaller chunks.