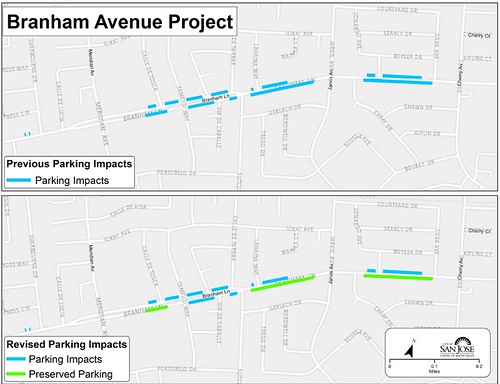 The city oriinally planned to remove street parking from both sides of Branham and use the space for buffered bike lanes. After community objections, SJDOT re-drew the plans to retain street parking on the eastbound side of Branham. City of San Jose Active Transportation Program Director John Brazil says they’ll still have continuous bike lanes on both sides of Branham, but they may not have an additional buffer where there’s parking on both sides.

The monthly San Jose Local Team Meeting takes place tonight at the Silicon Valley Bicycle Coalition office on Third Street at St John in downtown San Jose. This is a commercial building that locks up at 6:30, so you want to enter the building before the 6:30 meeting start time.

The proposed Santa Clara County transportation sales tax measure is on tonight’s agenda, although I’m sure the Lincoln Avenue road diet will also be discussed.