Look closely at this new seatpost clamp from Fortified Bicycle. Like other security clamps, the Payback clamp uses a keyed bolthead to help protect your saddle from theft, but there’s more.

That extra bolt for the saddle clamp has a matching head to further secure the saddle itself from theft. Fortified launched a Kickstarter today to fund this project. 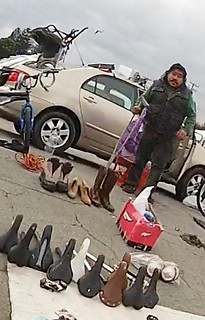 A $15 pledge toward their Kickstarter will get you the keyed seatpost collar should funding succeed. That by itself is a good price for an anodized alloy seatpost clamp. For five dollars more, Fortified adds the keyed saddle bolt. For an additional $5, Fortified adds an anti-theft guarantee: they’ll replace your stolen saddle with the same or better in the event of theft. You can get ten seatpost clamps to give to your friends for only $99.

The usual cable / chain trick no longer suffices in many urban areas. Comparable solutions with security heads from established players have their benefits, but they start at $30 and go up from there. As far as I know, Fortified offers the only saddle security guarantee in the business.

This scene of a vendor with a dozen seatpost-connected saddles is common at flea markets and sidewalk chop shops around the San Francisco Bay Area. The standby trick of looping a thin cable or length of chain through the seat rails no longer suffices to secure your saddle in many urban areas.

Fortified co-founder Slava Mennen says he and his team developed the Paypack seatpost collar and saddle bolt after their friend Max lost a $180 Brooks saddle to theft in Boston. You can see Max’s story in the Kickstarter promotional video.

Fortified successfully funded a popular set of bike lights with a secure mounting system, and these lights are shipping now so I put Fortified in my list of established outfits that you can trust to follow through and deliver. You can add the Defender headlight and Afterburner taillight as additional incentives when you pledge to support production of the Payback.

To learn more, visit Kickstarter: Fortified: We Caught A Bike Thief. This is Payback.