By now you’ve seen the news about the Google autonomous car that was pulled over for driving too slowly. This happened on El Camino Real at Rengstorff Avenue in the city of Mountain View, CA. Guess which area of Mountain View is the most dangerous for pedestrians?

I zoomed in on this map showing 10 years of FARS traffic fatality data. El Camino Real is highlighted in blue. The yellow line to the left is Rengstorff, the other line is El Monte.

Here’s another visualization , this one generated from SWITRS data to show all incidents from 2004 to 2013 involving pedestrians and cyclists. Red shows fatalities, orange shows severe injuries, yellow designates minor injuries and white are those involving “complaints of pain.” 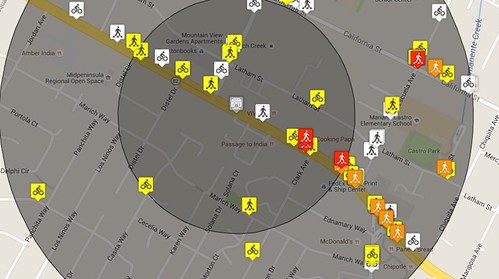 An aside about traffic injury classifications: Severe injuries are life changing injuries — brain damage, lost limbs, lost organs, and so forth; in other words, anything involving extended or permanent medical care. “Minor” injuries include all other visible injuries, up to and including compound fractures and lots of blood.

Even aside from the fatalities, we saw many injury collisions on El Camino Real across this part of Mountain View.

This is the area where Mountain View police say a Google autonomous car traveling at 24 MPH in a 35 zone is impeding traffic, even with two other lanes available for passing traffic on a Thursday afternoon.

Exposure is high both because of very high vehicular traffic volumes and a high volume of foot traffic. Danger is high because Mountain View police prioritize speed of a over safety in spite of the heavy pedestrian traffic. This is the same department that routinely cites cyclists who “take the lane” on multi-lane roads in which the right-hand lane is too narrow to share. Numerous bike educators, safety experts, and cyclist advocates have explained the exceptions to CVC 21202 (California’s far right law) over the years, but to no avail. If you look at the SWITRS map, you’ll see California Street just to the north — a designated bike route — is another hot spot for pedestrians and cyclists.

The VTA #22 bus stops at every block and probably travels at about 25 MPH at the most. When I bike here on El Camino Real, I take the whole right lane, and other traffic doesn’t seem to have a problem passing me. During chunks of the workday, in fact, it’s all the other traffic impeding me on the bike, yet I’ve never heard of MVPD ticketing motorists for failing to get out of a cyclist’s way.

The police officer ended up not giving the ticket after the Google car operator explained that his vehicle use in a 35 MPH zone is completely lawful. I wonder how many tickets are written on El Camino Real for those who drive 9 MPH over the limit?