What if you could make driving dramatically more expensive in a way that won’t punish people who drive, but reward those who seek ways to reduce their driving without wrecking the economy? 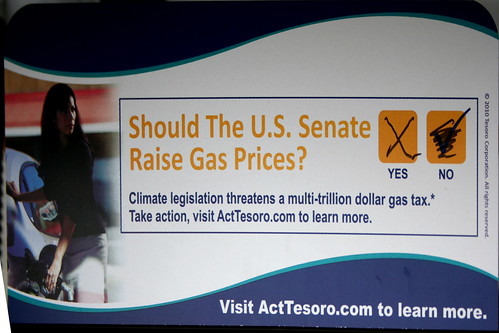 Thirty years ago, conservative columnist Charles Krauthammer proposed a what he called the “Net Zero Gas Tax to reduce consumption. To keep revenue neutral, he tied his proposed gas tax increases to a dramatic reduction in the payroll tax equal to the average tax paid nationwide.

For example, if the average American contributes $4000 annually toward’s Krauthammer’s dramatically higher gas tax (on the order of a dollar per gallon), then every taxpayer gets a $4000 tax rebate.

The whole idea is to reward those who drive less and to disadvantage those who drive more. Indeed, inequities of this sort are always introduced when, for overarching national reasons, government creates incentives and disincentives for certain behaviors. A tax credit for college tuition essentially takes money out of the non-college going population to subsidize those who do go–and will likely be wealthier in the end than their non-college contributors. Not very fair. Nonetheless, we support such incentives because college education is a national good that we wish to encourage. Decreased oil consumption is a similarly desirable national good.

Krauthammer, a critic of environmental regulation and global warming theory, believes his revenue neutral gas tax has several benefits. He points out people will naturally be encouraged to drive less and to either buy higher mileage cars or even to use alternate forms of transportation. Profits that now flow to multinational oil corporations stay in the local economy. Krauthammer believes his net-zero consumption tax will do more for transit ridership and clean air than decades of environmental regulations and CAFE standards have accomplished.

More recently, Krauthammer continues to advocate for large increases in the Federal gas tax, on the order of a dollar per gallon.

The average American buys about 12 gallons of gas a week. Washington would be soaking him for $12 in extra taxes. Washington should therefore simultaneously reduce everyone’s FICA tax by $12 a week. Thus the average driver is left harmless. He receives a $12-per-week FICA bonus that he can spend on gasoline if he wants — or anything else. If he chooses to drive less, it puts money in his pocket. (The unemployed would have the $12 added to their unemployment insurance; the elderly, to their Social Security check.)

The point of the $1 gas tax increase is not to feed the maw of a government raking in $3 trillion a year. The point is exclusively to alter incentives — to reduce the disincentive for work (the Social Security tax) and to increase the disincentive to consume gasoline.

For the current legislative session, governors in New Jersey and Mississippi say they can’t support an increase in the gas tax unless it’s accompanied by decreases in other taxes. Lawmakers in Indiana, Georgia, Michigan and South Carolina are working on road funding bills that increase their states’ respective fuel excises while reducing other taxes.

These attempts are designed to increase road funding while reducing revenue to the general fund, so they’re not really in the spirit of Krauthammer’s proposal: a consumption tax to discourage solo driving while encouraging other forms of transportation. These recent “revenue neutral” efforts tend to be regressive.

British Columbia’s revenue neutral carbon tax is returned to eligible residents as a dividend through the “Climate Action Tax Credit.” If the government takes in an average of $1000 of carbon tax revenue per capita, a portion of that $1000 is applied as a tax credit when you file your provincial tax return. Unlike the “net zero” gas tax proposals under discussion in the United States, this dividend is more in the spirit of what Krauthammer and other supply side economists proposed. British Columbia has the highest excise in Canada; the combined Federal and provincial excise works out to the equivalent of 87 American cents per gallon at today’s exchange rates. The cities of Vancouver and Victoria impose their own local excise, bringing the total gas tax to $1.16 in Vancouver, and $1.01 in Victoria BC. Gas prices in Vancouver currently average a hair under $3 per US gallon, compared to under $2 across the border in Bellingham. You can bet this 50% premium in gas prices tends to drive down vehicle miles traveled.

Alberta also recently approved a carbon tax with some revenue neutral features, including a cash rebate to taxpayers. You’re free to use that rebate for whatever you want: you’re free to continue driving more miles in your 12 MPG SUV as is your God-given right in the land of the free and your driving expensive will remain the same. Alternatively, you can save money and buy a bicycle, a transit pass, an electric car, a home closer to work, or a Tim Hortons gift card for your favorite bike bloggers, if you want.

Recent research shows Americans are more likely to support a gas tax if it’s tied to a rebate as suggested by Krauthammer.

Past research showed that while 80 percent to 90 percent of Americans were willing to pay higher prices for cars and electricity that use renewable energy, some 70 percent opposed higher taxes on gasoline and electricity.

In fact, gas tax increases were consistently the least popular option for reducing use of fossil fuels, and in the face of unsupportive surveys and polls few national politicians have taken up the cause. However, when people were told how the money would actually be spent, their views changed.

On average, people would accept (i.e., support or be neutral towards) a gas tax increase of 51 cents per gallon if the proposal was revenue-neutral, meaning any extra revenue would be refunded to taxpayers equally.

Last week, when the California Bicycle Coalition surveyed cyclists on the best ways the California Assembly can encourage cycling in the Golden State, I put “revenue neutral gas tax” at the top of my list. Making driving expensive in a way that won’t wreck the economy, and everything else will follow.

Democrats generally have been hostile to the idea of revenue neutral gas taxes, primarily because they tend to be of the form that reduces revenue for other programs, rather than the partial rebate used in Alberta and British Columbia and proposed by Krauthammer.

“Former secretary of treasury and former secretary of state (George) Shultz and Arthur Laffer, the Reagan adviser on supply-side economics, have both strongly endorsed a revenue neutral carbon tax, and I would emphasize, from the conservative point of view, revenue neutrality is key because a carbon tax would require a reduction in other taxes,” Brown told reporters on a conference call. “Other people will have other points of view, and it’s a whole issue of how popular that might be, or how political. But I think there’s more potential down that road given the support of both conservatives and liberals.”

What do you think? Could you support a revenue neutral gas tax that hikes the price of gas dramatically if it’s tied to a rebate?

Read more in the Bee: “A carbon tax Jerry Brown thinks could have potential.” H/T to Keith Malone.